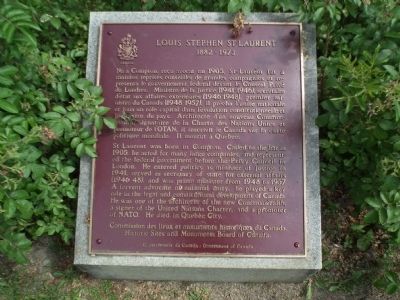 St-Laurent was born in Compton. Called to the bar in 1905, he acted for many large companies, and represented the federal government before the Privy Council in London. He entered politics as minister of justice in 1941, served as secretary of state for external affairs (1946-48) and was prime minister from 1948 to 1957. A fervent advocate of national unity, he played a key role in the legal and constitutional development of Canada. He was one of the architects of the new Commonwealth, a signer of the United Nations Charter, and a promoter of NATO. He 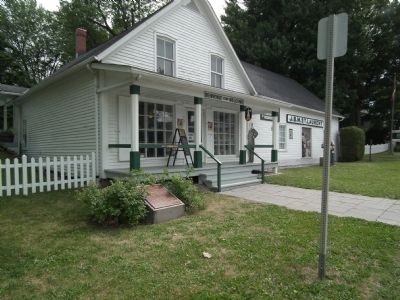 Photographed By Kevin Craft, July 29, 2011
2. Louis Stephen St-Laurent Marker
In front of the general store owned by his father, where he grew up (now a National Historic Site of Canada)

Click or scan to see
this page online
died in Québec City.

Topics and series. This historical marker is listed in this topic list: Government & Politics. In addition, it is included in the Canada, Historic Sites and Monuments Board series list. A significant historical year for this entry is 1905.

Location. 45° 14.524′ N, 71° 49.58′ W. Marker is in Compton, Québec, in Coaticook. Marker is on Route Louis-S.-Saint-Laurent (Québec Route 147) 0.1 kilometers south of Hatley Road (Québec Route 208), on the right when traveling north. The marker is located on the grounds of the Louis S. St-Laurent National Historic Site of Canada. Touch for map. Marker is at or near this postal address: 6790 Rte Louis-S-Saint-Laurent, Compton QC J0B 1L0, Canada. Touch for directions.

More about this marker. The Louis S. St. Laurent National Historic Site of Canada, which is located in Compton, in the Eastern Townships, some 20 km from Sherbrooke, is a living reminder of the life and work of the former Prime Minister of Canada. The rural atmosphere of the village, the charming house in which Louis St. Laurent was born, the once bustling general store: all take us back to another epoch in which we can savour the enchantment of the lifestyle of a different time, while learning about this great man, marked out by destiny. 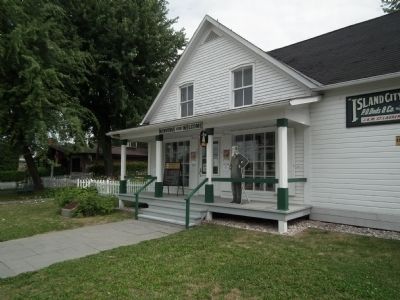 Photographed By Kevin Craft, July 29, 2011
3. Louis Stephen St-Laurent Marker
Marker can be seen on the left