This property has been placed on the
National Register of Historic Places
Standard Bedding Co.
Designed by R. Messmer & Bros.
Tour Site 62
1913

Topics. This historical marker is listed in this topic list: Notable Buildings. A significant historical year for this entry is 1913. 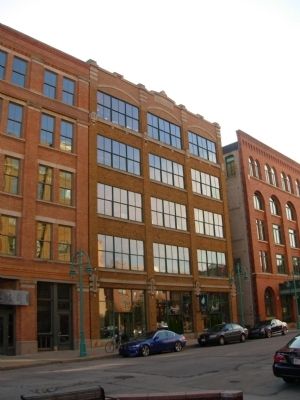 Click or scan to see
this page online
(within shouting distance of this marker); American Wholesale Grocery Company (about 300 feet away, measured in a direct line); Mrs. Isabella Ryder Building (about 300 feet away). Touch for a list and map of all markers in Milwaukee.

Regarding Standard Bedding Co.. Built in 1913 by architects R. Messmer & Brothers, Inc., the structure housed the Standard Bedding Co., which manufactured feather mattresses at the location for 20 years. In 1990, Triad Engineering renovated the building and currently occupies the site along with Thiel Visual Design, Neroli Salon & Spa and several other offices.
- Historic Third Ward Walking Tour brochure
Credits. This page was last revised on June 16, 2016. It was originally submitted on June 19, 2014, by Paul Fehrenbach of Germantown, Wisconsin. This page has been viewed 390 times since then and 32 times this year. Photos:   1, 2. submitted on June 19, 2014, by Paul Fehrenbach of Germantown, Wisconsin. • Bill Pfingsten was the editor who published this page.
Share this page.