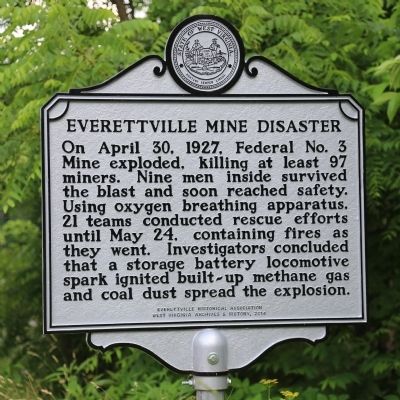 By J. J. Prats, June 21, 2014
1. Everettville Mine Disaster Marker
Inscription.
Everettville Mine Disaster. . On April 30, 1927, Federal No. 3 Mine exploded, killing at least 97 miners. Nine men inside survived the blast and soon reached safety. Using oxygen breathing apparatus, 21 teams conducted rescue efforts until May 24, containing fires as they went. Investigators concluded that a storage-battery locomotive spark ignited built-up methane gas and coal dust spread the explosion. . This historical marker was erected in 2014 by Everettville Historical Association and West Virginia Archives and History. It is in Everettville in Monongalia County West Virginia 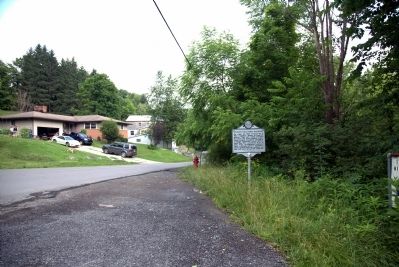 Also see . . .  Federal No. 3 Mine Explosion. U.S. Mine Rescue Association entry. “April 30, 1927 probably began like just any other workday for the miners of the Federal No. 3. But the day came to a sudden end for 97 of the miners when a massive explosion ripped through the mine, killing most of them instantly. Only nine miners working that day survived. Several men survived the initial blast, trapped hundreds of feet underground for several hours before succumbing to gas fumes. Among them was Henry Russell.

“Russell gathered pieces of coal and scraps of paper torn from cement sacks, and began to write notes to his wife. The notes, which he placed carefully in his lunch box, were found along with the bodies of Henry and his coworkers and passed along to Russell’s widow, Mary.” (Submitted on June 21, 2014.)

Editor’s want-list for this marker. Photos of Miners Memorial Park • Can you help?
Share This Page.