The People and the Lieutenant Governor

The Lieutenant Governor has a busy schedule of attending cultural events and dinners, military and civilian ceremonies, and visiting schools and community groups. Based on a custom dating back to the fur trade and French royalty, the Lieutenant Governor has hosted an annual New Years' Day Levee since 1872, welcoming the public to come in from the cold and enjoy food and drink. 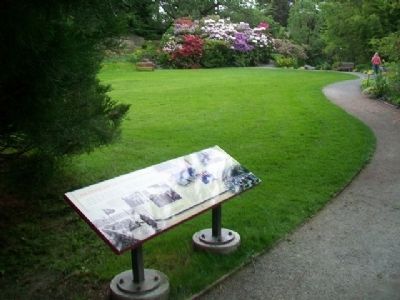 Photographed By William Fischer, Jr., May 21, 2014
2. The People and the Lieutenant Governor Marker

Click or scan to see
this page online
sent Nichol a canoe that was placed on the grounds at Government House.
BC Archives, A-06089

3. Lieutenant Governor Robert Randolph Bruce travelled extensively in the province, unveiling a cairn to Alexander Mackenzie in Bella Coola in 1927, and visiting Atlin, in the northwest corner of the province, in 1929. Here, Bruce arrived on Galiano Island where he opened the new community hall in May 1929.
BC Archives, F-02893

5. Rick Hansen travelled in a wheelchair 40,000 kilometres through 34 countries during his Man in Motion Tour to raise awareness about people with disabilities. In 1987, Port Alberni-born Hansen became a Companion of the Order of Canada and later met with Lieutenant Governor Robert Gordon Rogers and Chatelaine Jane Rogers at Government House.
Government House Archives

6. As British Columbia's first Aboriginal Lieutenant Governor, the Honourable Steven L. Point promoted the theme of reconciliation. With KwaGulth master carver Chief Tony Hunt, Point carved two canoes: an ocean canoe that he gave to the Royal Canadian Navy in honour of its 100th anniversary in 2010, and a river canoe, Shxwtitostel, that he gave to the Province. For Point, the canoe symbolized the "need to create a better understanding amongst all people that we are in the same canoe. No matter where are you from, we all need to paddle together." Here, Point paddles the river canoe in Ross Bay in 2009.
Government House Archives

Topics. This historical marker is listed in these topic lists: Charity & Public Work • Government & Politics. A significant historical month for this entry is May 1929.