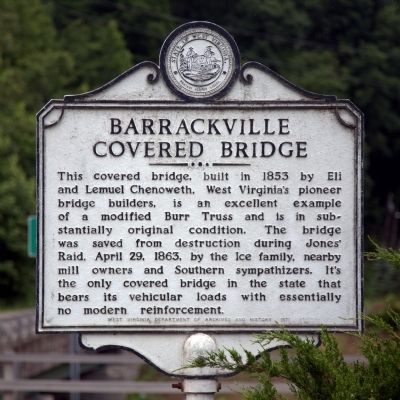 By J. J. Prats, June 21, 2014
1. Barrackville Covered Bridge Marker
Inscription.
Barrackville Covered Bridge. . This covered bridge, built in 1853 by Eli and Lemuel Chenoweth, West Virginia’s pioneer bridge builders, is an excellent example of a modified Burr Truss and is in substantially original condition. The bridge was saved from destruction during Jones’ Raid, April 29, 1863, by the Ice family, nearby mill owners and Southern sympathizers. It’s the only covered bridge in the state that bears its vehicular loads with essentially no modern reinforcement. . This historical marker was erected in 1971 by West Virginia Department of Culture and History. It is in Barrackville in Marion County West Virginia

This covered bridge, built in 1853 by Eli and Lemuel Chenoweth, West Virginia’s pioneer bridge builders, is an excellent example of a modified Burr Truss and is in substantially original condition. The bridge was saved from destruction during Jones’ Raid, April 29, 1863, by the Ice family, nearby mill owners and Southern sympathizers. It’s the only covered bridge in the state that bears its vehicular loads with essentially no modern reinforcement.

Erected 1971 by West Virginia Department of Culture and History.

Topics and series. This historical marker is listed in this topic list: Bridges & Viaducts. In addition, it is included in the Covered Bridges 🌉, and the West Virginia Archives and History series lists. A significant historical month for this entry is April 1880. 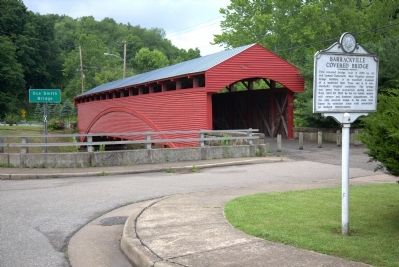 By J. J. Prats, June 21, 2014
2. Barrackville Covered Bridge and Marker
The replacement bridge is out of view to the left.

Click or scan to see
this page online
Touch for map. Marker is in this post office area: Barrackville WV 26559, United States of America. Touch for directions.

Regarding Barrackville Covered Bridge. As you can see on photograph 5, some years after the marker was erected, in 1992, traffic was transferred to a newly-built highway-style concrete-over-steel bridge built beside it, named for Oce Smith. The covered bridge, restored in 1998–1999, is now closed to motorized traffic, pedestrians and bicycles can still cross through it.

The bridge spans 145 feet across Buffalo Creek. It was listed in the National Register of Historic Places in 1981.

Related marker. Click here for another marker that is related to this marker. It is about another West Virginia covered bridge built by Lemuel Chenoweth. This one if further south on US 250 at Philippi. 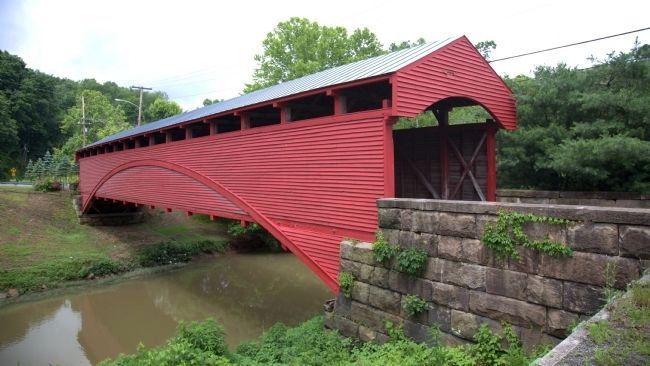 By J. J. Prats, June 21, 2014
3. Barrackville Covered Bridge, View of Side Facing West
1. WV Department of Transportation Page for the Barrackville Covered Bridge. Excerpt: “West Virginia’s intent to capitalize on what it had learned by putting to further use the skills perfected during Philippi restoration efforts was evidenced in mid-1990 when the governor announced an ambitious program, estimated at $3.5 million, to restore the state’s remaining covered bridges. At a November 1990 public meeting in Barrackville, Dr. Emory Kemp, WVU presented preliminary plans for restoring the turn-of-the-century look of the remaining structures, beginning with the Marion County span built by Lemuel and Eli Chenoweth in 1853 as part of the Fairmont-Wheeling Turnpike.” (Submitted on July 4, 2014.)

2. 1973 National Register of Historic Places Nomination Form.
Physical Appearance. The Barrackville Bridge has a total length of 145 feet-9¾ inches excluding the eaves of the roof. The main framing consists of two multiple Kingport trusses each of which is flanked by a pair of arches. This is a typical Burr Truss system with sixteen vertical posts. The panel at center span and the panes at either end have cross diagonal bracing (a variation from typical Burr Truss design which consists of all diagonals inclined toward the center) while the remaining panels have only one diagonal. . . .

The bridge floor is supported by the lower chord of the truss. 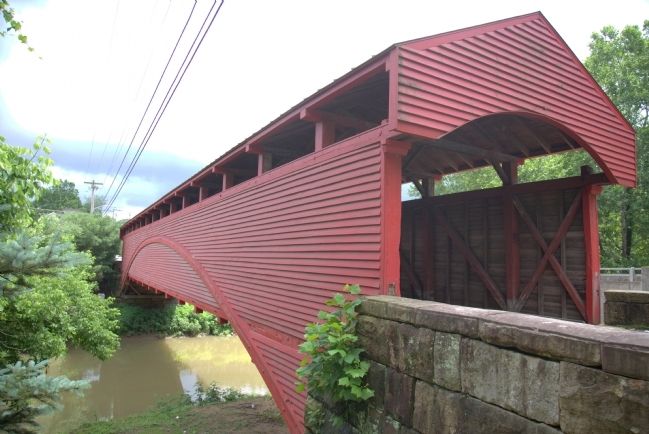 Making up the roof truss of the structure are a series of transverse members reaching from the vertical posts of one truss to the other. Between each of these transverse members is cross bracing of 4" x 6" pieces secured by treenails (wooden pegs) and wedges.

The foundation for the bridge consists of a north and south abutment built from stone cut into squares of approximately three feet with no mortar used. The transverse members directly over the ends of the arch are supported additionally with 9¼" x 9¼" vertical timbers. Four vertical posts of the truss are connected to the arch ends which in turn are located on concrete pedestals poured on the abutment (a modification of the original supports).

The siding was not added during the original building, but horizontal shiplap sheathing was placed on the bridge approximately twenty years later by R. L. Cunningham to protect the bridge from the elements.

In 1934, C. A. Short of Shinnston was hired by the State Road Commission to repair the bridge. He added 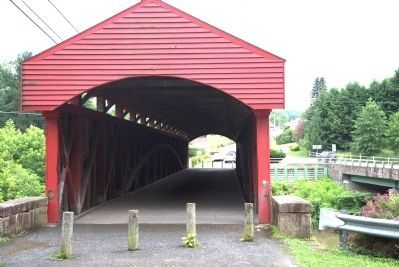 By J. J. Prats, June 21, 2014
5. Barrackville Covered Bridge, View Southbound
Click image to zoom in to examine internal construction. The floorboards are also wood.
a sidewalk (sometimes called a wart), improved the approaches, reinforced the bridge truss with steel rod hangers from the arch to the bottom chord, and painted it again.

Again in 1951, the State Road Commission helped prolong the bridge’s life by adding supports to the floor stringers.

Statement of Significance. After the Northwestern Turnpike (Route 50) was completed, Colonel Crozet planned another road across the mountains, the Staunton-Parkersburg Turnpike. For the center section of this route, all the main river crossings were built originally by West Virginia’s most famous bridge builder, Lemuel Chenoweth of Beverly in Randolph County.

Chenoweth's education was minimal, for he attended schools financed by state penalties and fines and which were only in session for short periods of time. Initially he built furniture and wagons, but when bids were asked for state bridges he decided to try his hand at building something bigger. Some small bridges in the Weston area were built by Chenoweth, so that when the time came to bid for the bridges on the Stauton-Parkersburg Turnpike, he had developed an arch-truss design of the Burr-type which he felt would be competitive.

He constructed many bridges on smaller routes at the same time he was fulfilling his contract on the Staunton-Parkersburg Turnpike. In 1852, he built his most celebrated structure, the Philippi Bridge over Tygart’s Valley River, a two lane, two span (138'-8" each) covered bridge, which was the site of the first land battle of the Civil War. A year later (see note below) with the help of his brother Eli, he built a wide, single-lane bridge across Buffalo Creek at Barrackville in 1853. When the Civil War commenced, his building activity ceased, and he sat out the conflict at his home and watched many of his works destroyed by either Union or Confederate troops. He rebuilt his hometown bridge at Beverly seven years after it had been burned in 1865. It was his last work and it lasted until 1953.

Of the many excellent covered bridges once found in West Virginia, only three, Philippi and Barrackville, both by Lemuel Chenoweth, and the Carrollton Bridge, remain standing along with some relatively small country spans. The bridge at Philippi is maintained as a historical relic and all three bridges carry daily traffic, although. the Philippi and Carrollton bridges do so my means of steel girders, concrete decks and added piers. The Barrackville Bridge is the only major covered bridge in West Virginia that supports its vehicle loading with essentially no modern reinforcement, certainly a tribute to Chenoweth's 117 year old masterpiece.

The bridge is an excellent example of a modified Burr Truss, which, except for the Wart (i.e. sidewalk added in 1934) is in substantially original condition.

Through the good offices of the Ices family, who were mill owners and confederate sympathizers, the bridge was spared during Jones’ Raid, April 29, 1863. It is located near the 18th Century site of Ice’s mill. Together they offer attractive possibilities for developing a park to serve nearby metropolitan centers.

NOTE: Most sources use 1852 as the date when the Barrackville Bridge was built; however, recent data from Richmond, Virginia, indicate that it was built in 1853.