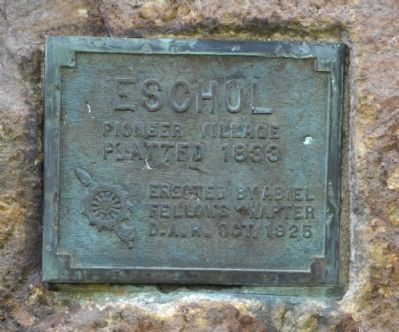 Photographed By Duane Hall, July 9, 2014
1. Eschol Marker
Inscription.
Eschol. . , , Pioneer Village , Platted 1833 , , Erected by Abiel , Fellows Chapter , D.A.R. Oct. 1925 . This historical marker was erected in 1925 by Abiel Fellows Chapter of the Daughters of the American Revolution. It is Near Three Rivers in St. Joseph County Michigan

Erected 1925 by Abiel Fellows Chapter of the Daughters of the American Revolution.

Topics and series. This historical marker is listed in this topic list: Settlements & Settlers. In addition, it is included in the Daughters of the American Revolution (DAR) series list. A significant historical year for this entry is 1833.

Location. 41° 54.557′ N, 85° 38.349′ W. Marker is near Three Rivers, Michigan, in St. Joseph County. Marker is on Constantine Road, 0.1 miles north of Shorewood Drive, on the right when traveling north. Touch for map. Marker is in this post office area: Three Rivers MI 49093, United States of America. Touch for directions. 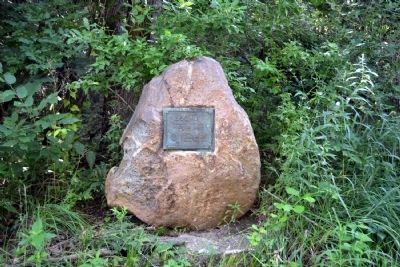 Additional commentary.
1. History of Eschol
Eschol is not a new name to the D.A.R. Through Mrs. Anna Barrows we first heard of this old deserted village located on the Frank Fitch farm just south of Three Rivers. The records state that it was platted by Charles B. Fitch and Asa Wetherbee in 1833, from a survey by J.S. Barry. The lots were 66 ft. front, 157 deep. The streets running east and west were Nottawa, Water, Short, Cass, Fayette, LaGrange. Those running north and south were St. Joseph, Pigeon and Lake, and a lake was either there or to be there, containing thirty and eighteen one-hundredths acres. This old village which proved but a dream has for its marker, we are told, broken 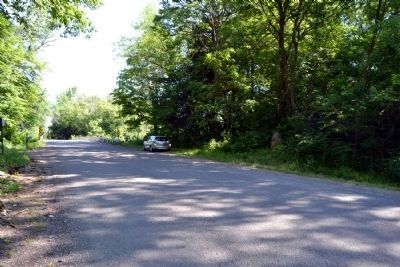 Photographed By Duane Hall, July 9, 2014
3. View to north along Constantine Road
Bridge over St. Joseph River north of marker
stones from the old mill, a post or two of a ruined cottage and besides them a few bushes of purple lilac.

Among the villages platted in Constantine township was the village of Eschol. The records show that this, the deserted village of St. Joseph, was located on the Fitch farm, later the property of Charles Houser, three miles south of Three Rivers. It was platted by Judge Charles Fitch and Asa Wetherbee from a survey made by John S. Barry in 1833.

Concerning the platters, Judge Charles B. Fitch, was born in Connecticut, in 1774. He was the grandson of the famous Hon. Thomas Fitch, Governor of Connecticut under British rule. Hezekiah Fitch son of Thomas, served with the American forces during the Revolution, in the Seventh Connecticut regiment. He enlisted July 8, 1775. The family numbers among its prized possessions, his sword which bears the inscription: "Hezikiah Fitch, 1764" Charles B. Fitch was a son of Hezekiah, he served in the war of 1812 on Lake Erie. Charles and his son Samuel both served in the Black Hawk war under Captain Calhoun. Accompanied by his family Judge Fitch settled 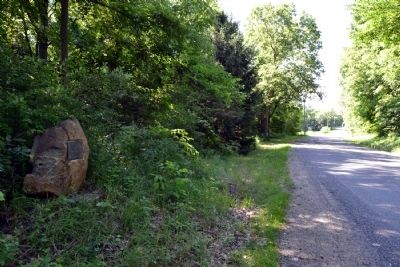 In 1832 Judge Fitch built a dam across the Prairie river (Hog Creek) near the outlet into the St. Joseph river. This dam backed the waters of the creek until they overflowed the lowlands near the present location of the New York Central bridge. It made a millpond where now the river road crosses the marsh. The mill race flowed through the ravine which forms the approach to the Drumhiller bridge.

The mill race made an island of about sixty acres of highland, on which stood the hamlet of Eschol. "Where the race entered the St. Joseph, Judge Fitch installed a busy water wheel to drive a saw mill, later a shingle mill and two run of small gristing stones. In 1838 R. M. Welch added a carding machine.

For a time the little village flourished and was a rival of the newly founded town of Three Rivers. In 1840 the dam went out, never to be rebuilt. Litigation followed. Buildings 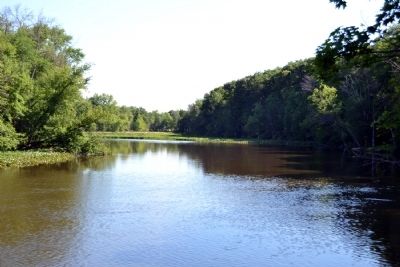 Photographed By Duane Hall, July 9, 2014
5. St. Joseph River
View to northeast from Constantine Road bridge
Site of Eschol on right side of river
were vacated, the town deserted.

A few century-old apple trees, planted by Judge Fitch, a lilac bush growing on the high hillside which over looks the river, are all that remains of the little village of Eschol.