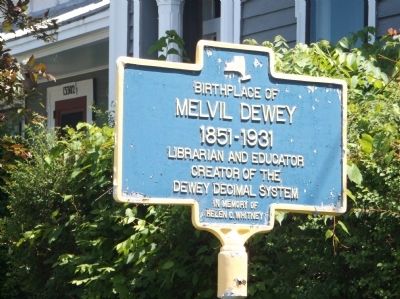 Librarian and educator creator of the Dewey Decimal System

Erected by In Memory Of Helen C. Whitney.

Regarding Birthplace of Melvil Dewey. Melvil Dewey was born in this house on December 10, 1851. He later invented the Dewey Decimal System to categorize library books, helped to host the 1932 Lake Placid Winter Olympics, and founded the Lake Placid Club.