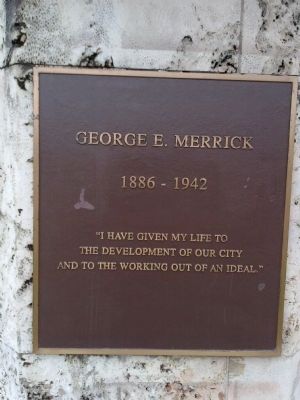 Photographed By Marsha A. Matson, August 4, 2014
1. George E. Merrick Marker
Inscription.
George E. Merrick. "I have given my life to the development of our city and to the working out of an ideal." . This historical marker is in Coral Gables in Miami-Dade County Florida

"I have given my life to the development of our city and to the working out of an ideal." 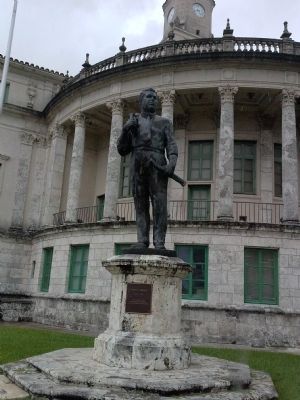 Photographed By Marsha A. Matson, August 4, 2014
2. George E. Merrick Monument and Marker
The marker is at the base of the monument, located in front of Coral Gables City Hall.

George Merrick was a dreamer as well as a man with a deep practical streak. His father had had the idea to sell lots to retired clergy; George Merrick expanded that idea into a dream for the development of a planned community on and beyond the family's property.

Merrick "eased" his way into this project, serving as a member of the Dade County Commission in 1914, and entering, around the same time, the real estate business. Merrick became a highly successful real estate salesman, selling land at the western edge of Miami, such as at Twelfth Street Manors.

He married Eunice Isabella Peacock, the granddaughter of two of Cocoanut Grove's most prominent pioneers, in 1916. Merrick built a home for his bride, called Poinciana Place, just west of the Coral Gables Merrick House, and began to plan his dream city.

Merrick studied the architectural styles of Spain and other Mediterranean countries. He recruited talented architects, such as Phineas Paist and H. George Fink (his cousin); talented artist Denman Fink (his uncle); and landscape architect Frank Button, who had a national reputation for his work. Together, they planned a Mediterranean-inspired 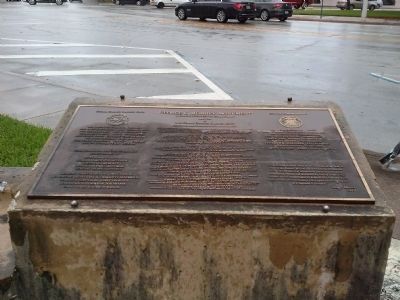 Photographed By Marsha A. Matson, August 4, 2014
3. George E. Merrick Monument Marker donated by the Coral Gables Garden Club
Presented to the City of Coral Gables, May 2006, by the Coral Gables Garden Club. A 1921 quote by George Merrick appears on the marker: "Coral Gables is not a thing of the moment, of the year, or even of the passing period, but a wonderful monument to the achievement of worthwhile perserverance in the creation of beauty and the bringing true of dreams that will as solidly endure, and as beautifully and bountifully age, as does the everlasting coral upon which this master development is founded."
city that would be distinctive for its beauty, appealing architecture, and amenities.
— Submitted August 4, 2014, by Marsha A. Matson of Palmetto Bay, Florida. 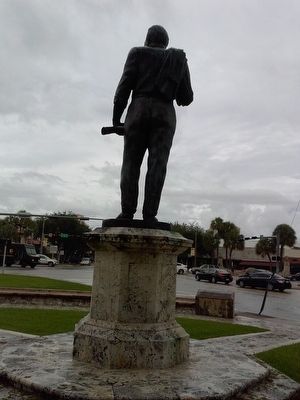