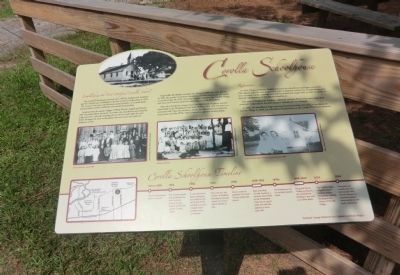 Establishing the First Unified Corolla School
The Corolla Schoolhouse was built circa 1890 by residents Sol Sanderlin and Val Twiford and established as the first unified Corolla school in 1905. The County's one-room schoolhouse accepted children of all grade levels and provided a teacher, textbooks and standardized grading.

Students from the nearby villages of Wash Woods, Seagull and Penny's Hill were bused down the beach. In winter, the schoolhouse was heated by a big coal stove, and each morning the bus driver would light the coals before he began his route so the school was warm and cozy upon the children's arrival.

Reportedly, 60 children attended the school in 1944, but, after the war in 1945, the number of students dwindled as families moved out of Corolla Village, and Currituck County closed the school due to lack of students.

After the schoolhouse closed, boys for the Corolla Academy summer school held at the Whalehead Club from 1959 to 1963 used the space as a recreation hall. Once the Academy closed, the schoolhouse sat empty for many years until the 1970s, when it served as a private 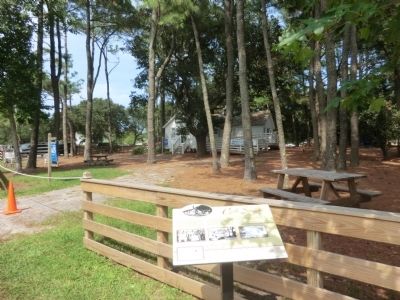 Click or scan to see
this page online
vacation home.

The original chalkboard, windows, cupboards and pine floors in the main room were preserved. Desks used in the old Colington Schoolhouse were donated.

Corolla Schoolhouse Timeline
Circa 1890 • The Corolla Schoolhouse was built.
1905 • The Corolla School was established by the Currituck County School System as the first unified Corolla School.
1940 • A rear board-and-batten extension was added to the south end of the building to accommodate more students and a lunchroom.
1945 • After the war, the number of students dwindled as families moved out of Corolla in search of jobs.
1958 • Due to lack of students, Currituck County closed the school.
1959-1963 • Boys attending Corolla Academy, a summer school held at the Whalehead Club, set up a pool table and used the space as a recreation 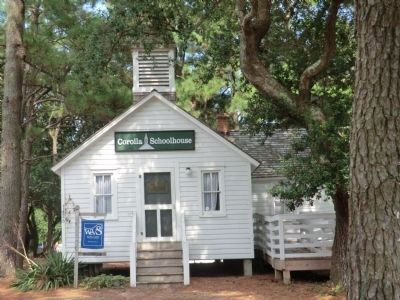 Photographed By Don Morfe, August 11, 2014
3. Corolla Schoolhouse
hall.
1970s • The building served as a private vacation home.
1999-2000 • Doug and Sharon Twiddy purchased and restored the building. It was used as an office space.
2002 • The Twiddys began using the schoolhouse to display educational exhibits, focusing on the history of Corolla Village.
2004 • The space was transformed into the Corolla Wild Horse Museum, and interactive educational exhibit on the area’s wild horses.

Topics. This historical marker is listed in these topic lists: Education • Settlements & Settlers. A significant historical year for this entry is 1890. 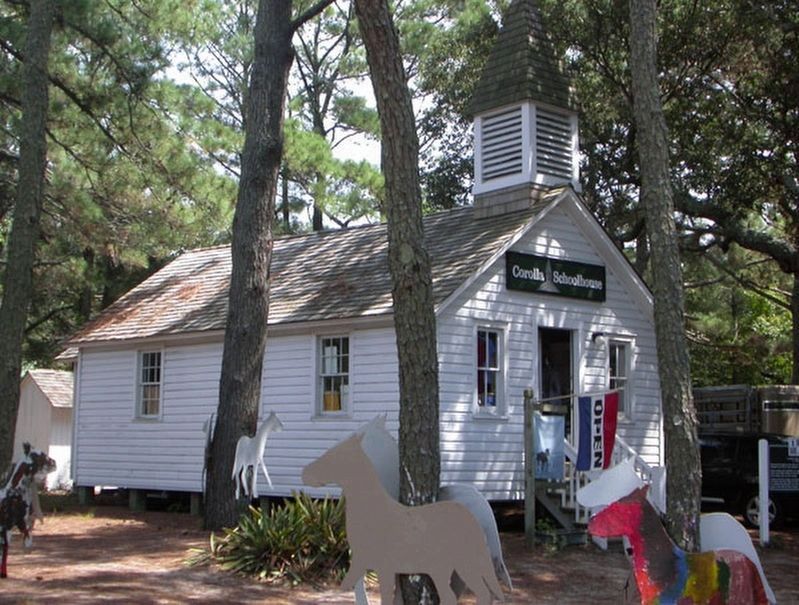 Photographed By Larry Gertner
4. Corolla Schoolhouse History
Twiddy & Company Realtors website entry
Click for more information.
marker. Corolla Historic Village (a few steps from this marker); a different marker also named Corolla Schoolhouse (within shouting distance of this marker); Boats And Blinds (within shouting distance of this marker); Corolla Chapel (about 600 feet away, measured in a direct line); Kill Devil Hills (about 600 feet away); Welcome to a Wetland (about 800 feet away); Currituck Beach Light Station (approx. 0.2 miles away); Currituck Beach Lighthouse (approx. 0.2 miles away). Touch for a list and map of all markers in Corolla.