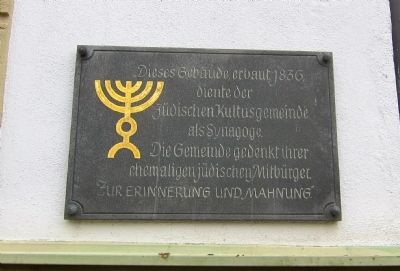 This building, constructed in 1836, served the Jewish community as a synagogue. The municipality commemorates its former Jewish citizens. Commemorate and Remember!

Topics. This historical marker is listed in this topic list: Churches & Religion. A significant historical year for this entry is 1836. 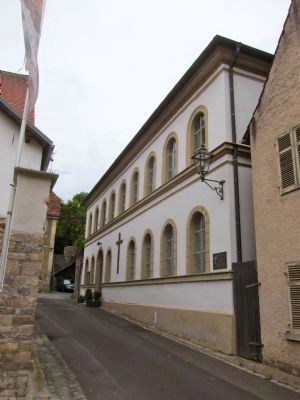 Photographed By Andrew Ruppenstein, August 29, 2014
2. The Former Mainstockheim Synagogue - Wide View
The synagogue interior was destroyed in the violence of Kristallnacht (November 9-10, 1938). After the Second World War the building was used to house refugees, and was later purchased by the Catholic Church, which consecrated it as a church on December 9, 1956.

The marker is visible here on the corner of the building.

More about this marker. The marker is on a very narrow street with no parking. Better to park on the Hauptstrasse and walk to the marker.

Also see . . .  The Mainstockheim Synagogue. Alemannia-judaica.de's German-languange page for the synagogue. Its history (in translation):... A new synagogue was built in 1836 in Mainstockheim, replacing an older one of uncertain age, with the contents of the old synagogue taken to the new one. The new synagogue windows show a characteristic round arched style from the period of the 1830s. The synagogue building also contained the parish hall of the Jewish community, the ritual bath, and the Jewish elementary school. In December, 1936 the Jewish community celebrated the synagogue's 100th anniversary …. (Submitted on September 25, 2014.)