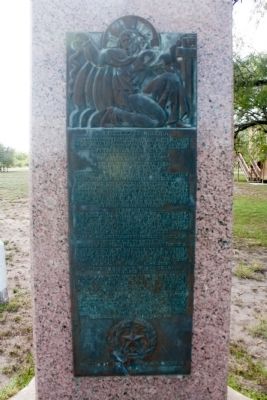 Founded in 1830 by John McMullen and James McGloin as the seat of their Irish colony under an empressario contract dated August 17, 1828 which was fulfilled by the empresarios 1830-1835.

Named in honor of Saint Patrick the Patron Saint of Ireland.

As the frontier outpost of Texas when the revolution began San Patricio 1835-1845 suffered all the miseries of that conflict with no compensating returns. At and near San Patricio, on February 27, 1836 general Jose Urrea's division of Santa Anna's Army surprised and overwhelmed Johnson's Texan party of 35 men, 9 or 10 Texans were killed, 6 or 7 escaped and 20 were sent to Matamoros as prisoners. After San Jacinto the town was destroyed and its inhabitants driven away. 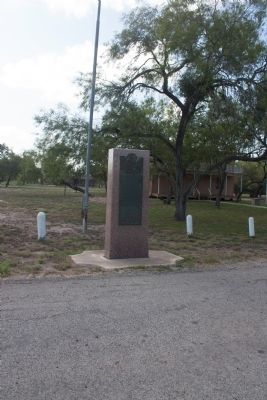 Topics and series. This historical marker is listed in these topic lists: Churches & Religion • Settlements & Settlers • War, Texas Independence. In addition, it is included in the Texas 1936 Centennial Markers and Monuments series list. A significant historical date for this entry is August 17, 1828.