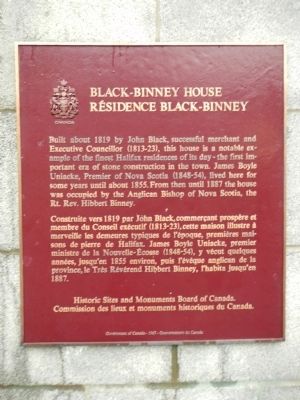 English
Built about 1819 by John Black, successful merchant and Executive Councillor (1813-23), this house is a notable example of the finest Halifax residences of its day - the first important era of stone construction in the town. James Boyle Eniacke, Premier of Nova Scotia (1848-54), lived here for some years until about 1855. From then until 1887 the house was occupied by the Anglican Bishop of Nova Scotia, the Rt. Rev. Hibbert Binney.

Topics and series. This historical marker is listed in this topic list: Notable Buildings 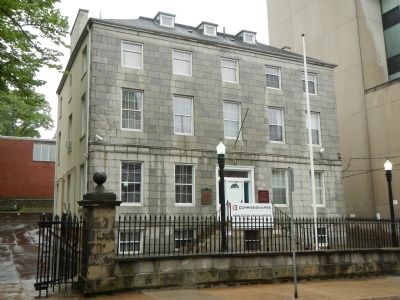 Photographed By Barry Swackhamer, June 14, 2014
2. Black-Binney House Marker
This marker is to the right of the entrance.

Click or scan to see
this page online
. In addition, it is included in the Canada, Historic Sites and Monuments Board series list. A significant historical year for this entry is 1819.