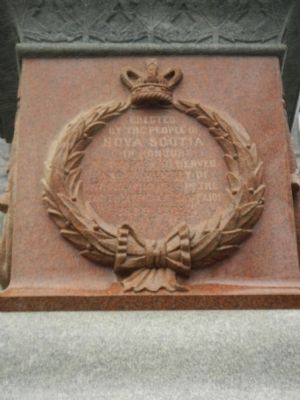 Erected 1902 by The People of Nova Scotia.

Topics. This monument and memorial is listed in this topic list: Military.

Location. 44° 38.898′ N, 63° 34.411′ W. Marker is in Halifax, Nova Scotia, in Halifax Region. Memorial is on Hollis Street close to George Street, on the right when traveling south. Touch for map. Marker is at or near this postal address: 1726 Hollis Street, Halifax NS B3J, Canada. Touch for directions. 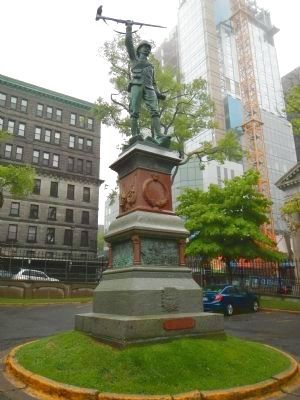 Click or scan to see
this page online
The Mitchell House (about 150 meters away); Gilbert Stuart Newton (about 180 meters away). Touch for a list and map of all markers in Halifax.

Also see . . .
1. For Queen and Country: Canadians and the South African War, 1899-1902 - Canadian War Museum. The South African War of 1899-1902 or, as it is more commonly known, the Boer War, occasioned Canada’s first major military expedition abroad. In some ways the war would be similar to the conflicts waged in the century just ending; in others it would anticipate the nature of modern warfare in the bloody century to come. (Submitted on October 10, 2014, by Barry Swackhamer of Brentwood, California.)