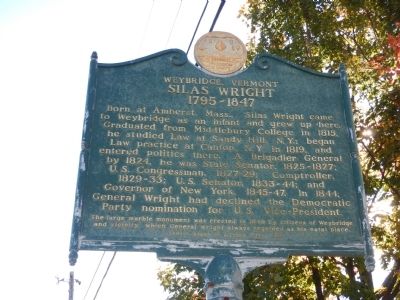 Photographed By Kevin Craft, October 12, 2014
1. Silas Wright Marker
Inscription.
Silas Wright. Born at Amherst, Mass., Silas Wright came to Weybridge as an infant and grew up here. Graduated from Middlebury College in 1815, he studied Law at Sandy Hill, N.Y.; began Law practice at Canton, N.Y. in 1819, and entered politics there. A Brigadier General by 1824, he was State Senator, 1825-1827; U.S. Congressman, 1827-29; Comptroller, 1829-33; U.S. Senator, 1833-44; and Governor of New York, 1845-47. In 1844, General Wright had declined the Democratic Party nomination for U.S. Vice-President., The large marble monument was erected in 1848 by citizens of Weybridge and vicinity, which General Wright always regarded as his natal place. . This historical marker was erected in 1965 by Vermont Board of Historic Sites. It is in Weybridge in Addison County Vermont

The large marble monument was erected in 1848 by citizens of Weybridge and vicinity, which General Wright always regarded as his natal place.

Erected 1965 by Vermont Board of Historic Sites.

Topics. This historical marker is listed in this topic list: Government & Politics. A significant historical year for this entry is 1815.

Location. 44° 2.286′ N, 73° 12.722′ W. Marker is in Weybridge, Vermont, in Addison County. Marker is at the intersection of Weybridge Road (Vermont Route 23) and James Road, on the right when traveling south on Weybridge Road. Touch for map 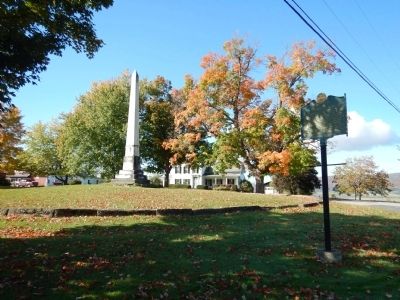 Click or scan to see
this page online
. Marker is in this post office area: Middlebury VT 05753, United States of America. Touch for directions.