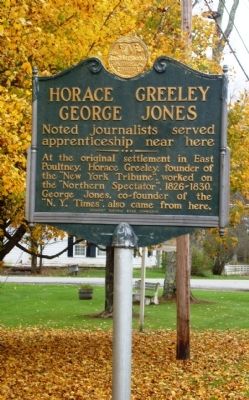 At the original settlement in East Poultney, Horace Greeley, founder of the "New York Tribune", worked on the "Northern Spectator", 1826-1830. George Jones, co-founder of the "N.Y.Times", also came from here.

Topics. This historical marker is listed in these topic lists: Communications • Government & Politics.

Other nearby markers. At least 8 other markers are within 6 miles of this marker, measured as the crow flies. Jeffrey Brace (within shouting distance of this marker); Site of Oldest Union Church in America (approx. 0.2 miles away); Poultney Civil War Monument (approx. ¼ mile away); Middletown Springs War Memorial (approx.