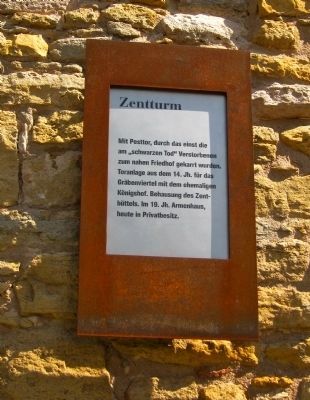 Marker text transcribed into English:
Part of the Plague Gate, through which victims of the Black Death were carted to the nearby cemetery. Dating from the 14th century, this was the entryway for the town's moated quarter and district court. Housed the bailiff responsible for collecting tithes. In the 19th century this was a poorhouse, and is now privately owned.

Other nearby markers. At least 8 other markers are within 10 kilometers of this marker, measured as the crow flies. The Owls' Tower (about 180 meters away, measured in a direct line); Ilmbacher Hof (approx. 0.2 kilometers 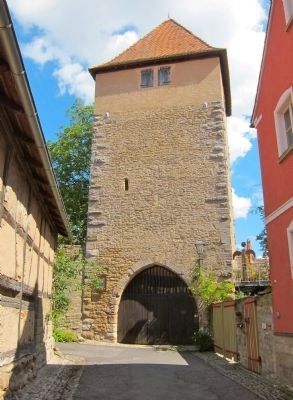 Photographed By Andrew Ruppenstein, August 28, 2014
2. Tithe Tower
The marker is on the wall just to the left of the arched entryway.