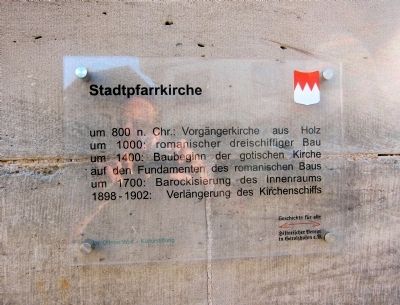 Marker text translated into English:
About 800 A.D.: A predecessor church is built of wood.
About 1000: Romanesque-style three-nave construction.
About 1400: Construction of a gothic church begins upon the foundations of the romanesque building.
About 1700: The interior is outfitted in baroque style.
1898-1902: Lengthening of the nave.


Erected by The Gerolzhofen Historical Society and the Dr. Ottmar Wolf Cultural Foundation. 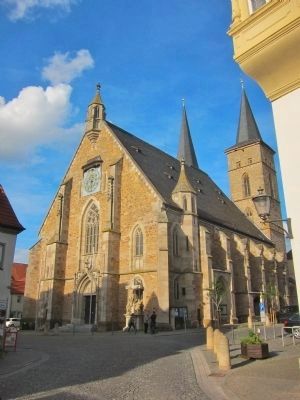 By Andrew Ruppenstein, August 28, 2014
2. Parish Church Marker
The marker, not quite visible here, is on the right front buttress of the building, just to the right of the people in the picture.
49° 54.062′ N, 10° 20.915′ E. Marker is in Gerolzhofen, Bavaria, in Landkreis Schweinfurt. Marker is at the intersection of Marktstrasse and Marktplatz on Marktstrasse. Touch for map. Marker is in this post office area: Gerolzhofen, Bavaria 97447, Germany. Touch for directions.

Regarding Parish Church. The Catholic parish church of Saint Mary of the Rosary and Holy St. Regiswindis , also called the "Steigerwalddom", was constructed from 1436 to 1479…. - German Wikipedia article on Gerolzhofen, in translation. 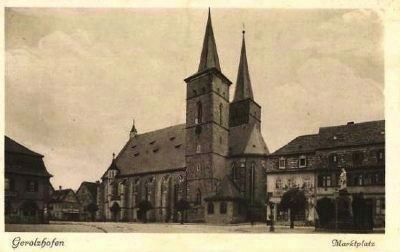 circa 1930
3. View of the Church Across the Market Square. 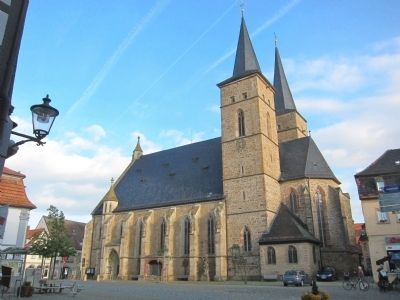