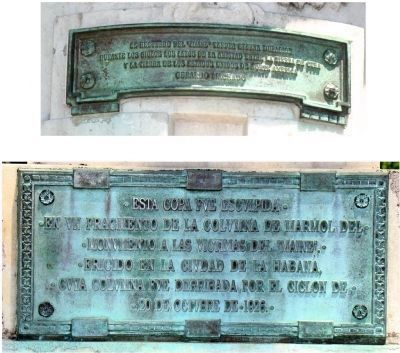 English translation:
The memory of the “Maine” will last forever through the centuries, as will the bonds of friendship between the homeland of Cuba and the homeland of the United States of North America. —Gerardo Machado.

This urn was sculpted from a fragment of the marble column from the Monument to the Victims of the “Maine” erected in the city of Havana. The column was toppled by the October 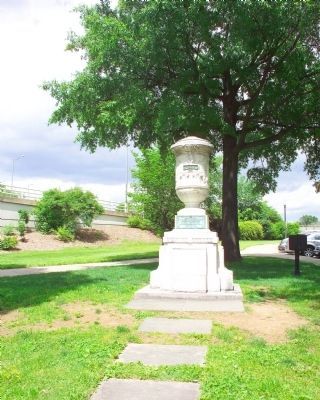 Topics and series. This historical marker is listed in this topic list: War, Spanish-American. In addition, it is included in the U.S.S. Maine Memorial Plaques series list. A significant historical month for this entry is October 1939.

Location. 38° 52.712′ N, 77° 2.295′ W. Marker is in Southwest Washington in Washington, District of Columbia. It is in East Potomac Park. Marker is on Ohio Drive Southwest, ¼ mile west of Buckeye Drive Southwest, on the right when traveling west. It is at the western edge of the parking lot situated between the two spans of the 14th Street bridge. Touch for map. Marker is in this post office area: Washington DC 20242, United States of America. Touch for directions.

More about this marker. President Gerardo Machado of the Republic of Cuba gave the monument to President Calvin Coolidge of the United States of America in 1928 and it was placed in East Potomac Park, in the vicinity of its present location. In 1957 it was removed during the construction of the present 14th Street bridge and forgotten. In 1996 an inquiry to a local newspaper with a photograph of the urn on lying its side in a Park Service storage yard started the rehabilitation of the monument, which was returned to East Potomac Park in 1998. 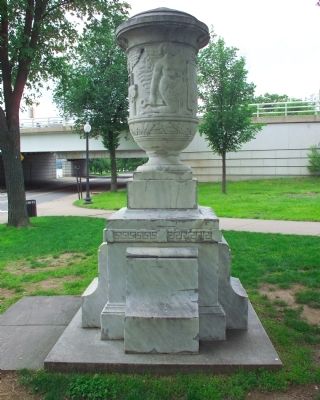 Photographed By Tom Fuchs, May 22, 2008
3. East Face of Monument
. The Spanish-American War Centennial website entry:
"On October 20, 1926, a hurricane struck the island. The corinthian columns were toppled and broken, as were the eagle and lintel. In November of the same year, funds were appropriated to repair the monument."
(Submitted on May 23, 2008, by Kevin W. of Stafford, Virginia.)

Additional commentary.
1. The Sculptor of this monument?
The sculptor's name is not readily available. But a good guess can be made. The original monument in Havana was designed by Felix Cabarrocas, a Cuban architect, artist and sculptor. As he was involved in the reconstruction of the monument to the Maine in Havana in 1927, from which the piece of marble used to make this urn was taken, its likely that he was involved in 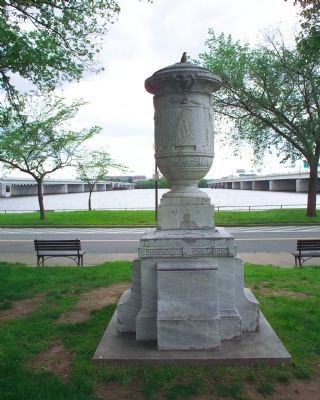 Photographed By Tom Fuchs, May 22, 2008
4. North Face of Monument
the making of the urn. Note To Editor only visible by Contributor and editor
— Submitted November 8, 2013, by J. Makali Bruton of Accra, Ghana. 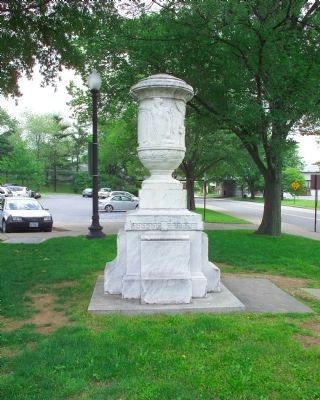 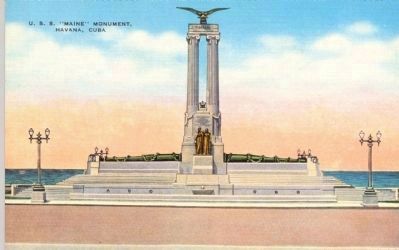 J. J. Prats Postcard Collection
6. U. S. S. “Maine” Monument, Havana, Cuba
“Built by the people of Cuba in grateful memory of the crew of the illfated U. S. Battleship ‘Maine,’ which was blown up in the harbor of Havana, Feb. 1898. This catastrophe was an important factor in causing the United States to assist Cuba in her war for independence.” Undated postcard No. 12506 published by Roberts & Co., Havana, Cuba. Made in U.S.A. 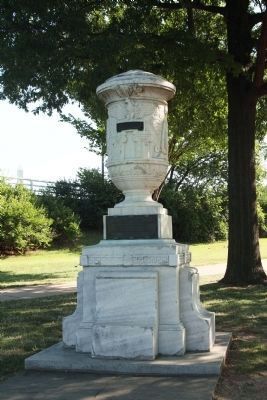 Photographed By Mike Stroud, July 16, 2011
7. Cuban Friendship Urn with Plaques
In 2007, the urn was placed on the National Register of Historic Places: Reference Number 07001053 For many years the urn stood outside the Cuban Embassy on 16th Street, N.W., in Washington. After relations between the United States and Cuba deteriorated following Fidel Castro's rise to power in Cuba in 1959, it disappeared from public view, it was discovered in a National Park Service warehouse in 1992 and moved to its present site. 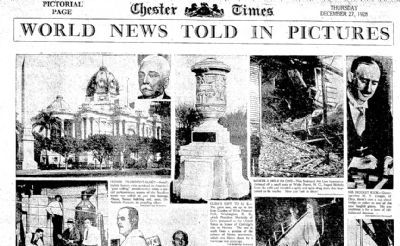 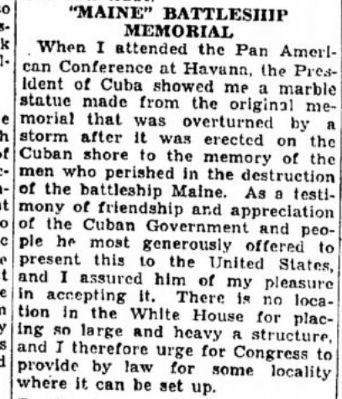