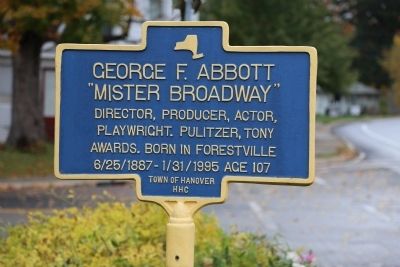 Erected by Town of Hanover HHC.

Location. 42° 28.123′ N, 79° 10.556′ W. Marker is in Forestville, New York, in Chautauqua County. Marker is at the intersection of Main Street (New York State Route 39) and Pearl Street (County Route 141), on the left when traveling east on Main Street. Touch for map. Marker is in this post office area: Forestville NY 14062, United States of America. Touch for directions. 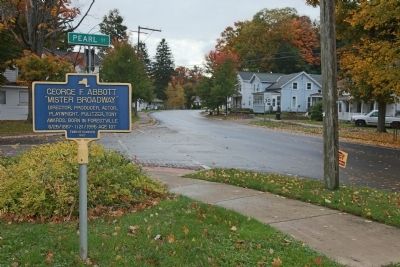 Also see . . .  Wikipedia Entry for George Abbott. “He started acting on Broadway in 1913. While acting in several plays in New York City, he began to write; his first successful play was The Fall Guy (1925). Abbott acquired a reputation as an astute ‘show doctor.’ He frequently was called upon to supervise changes when a show was having difficulties in tryouts or previews prior to its Broadway opening. His first great hit was Broadway, written and directed in partnership with Philip Dunning, whose play Abbott ‘rejiggered.’ It opened on September 16, 1926, at the Broadhurst Theatre and ran for 603 performances. Other successes followed, and it was a rare year that did not have an Abbott production on Broadway. He also worked in Hollywood as a writer and director while continuing with his theater work.” (Submitted on November 18, 2014.) 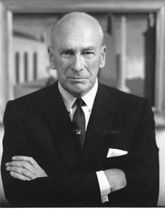