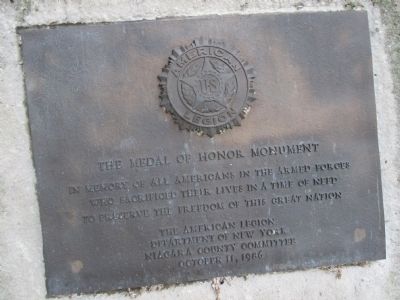 In memory of all Americans in the armed forces who sacrificed their lives in a time of need to preserve the freedom of this great nation.

Korean Conflict 1950-1953.
In honor of Private First Class William Thompson, United States Army, Congressional Medal of Honor, Bronx, NY and the other 33,646 Americans who died, the 103,259 Americans who were wounded, and all those Americans who participated in this noble cause.

Vietnamese Conflict 1961-1975.
In honor of Second Lieutenant John Paul Bobo, United States Marine Corps, Congressional Medal of Honor, Niagara Falls, NY and the other 56,554 Americans who died, the 303,654 Americans who were wounded, and all those Americans who participated in this noble cause.

In memory of America's bravest men and 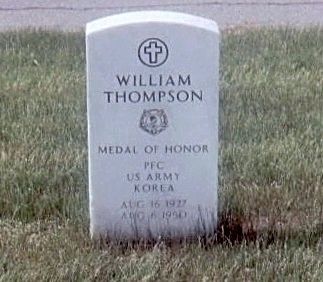 Photographed By Don Morfe, May 13, 2000
2. William Thompson-Korean War Medal of Honor Recipient
He is buried in Long Island National Cemetery, Farmingdale NY in Section DSS, Site 19. He was Killed in Action. His Medal of Honor information and citation is: *THOMPSON, WILLIAM. • Rank and organization: Private First Class, U.S. Army, 24th Company M, 24th Infantry Regiment, 25th Infantry Division. • Place and date: Near Haman, Korea, 6 August 1950. • Entered service at: Bronx, N.Y. • G.O. No.: 63, 2 August 1951. Citation: Pfc. Thompson, distinguished himself by conspicuous gallantry and intrepidity above and beyond the call of duty in action against the enemy. While his platoon was reorganizing under cover of darkness, fanatical enemy forces in overwhelming strength launched a surprise attack on the unit. Pfc. Thompson set up his machine gun in the path of the onslaught and swept the enemy with withering fire, pinning them down momentarily thus permitting the remainder of his platoon to withdraw to a more tenable position. Although hit repeatedly by grenade fragments and small-arms fire, he resisted all efforts of his comrades to induce him to withdraw, steadfastly remained at his machine gun and continued to deliver deadly, accurate fire until mortally wounded by an enemy grenade. Pfc. Thompson's dauntless courage and gallant self-sacrifice reflect the highest credit on himself and uphold the esteemed traditions of military service.

Click or scan to see
this page online
women whose duties resulted in the ultimate sacrifice for their nation, that will forever grieve their loss.

Topics and series. This monument and memorial is listed in these topic lists: War, Korean • War, Vietnam. In addition, it is included in the Medal of Honor Recipients series list. 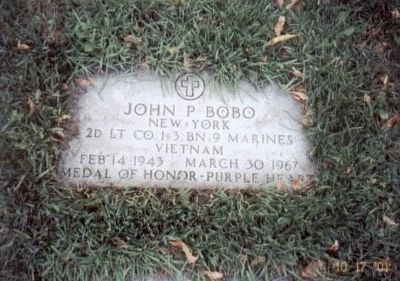 Photographed By Don Morfe, October 17, 2001
3. John Paul Bobo Vietnam War Medal of Honor Recipient
He is buried in Gate of Heaven Cemetery, Lewiston, NY, St. Mark Section, Lot 82. He was Killed in Action. His Medal of Honor information and citation is: *BOBO, JOHN P. • Rank and Organization: Second Lieutenant, U.S. Marine Corps Reserve, 3d Battalion, 9th Marines, 3d Marine Division (Rein), FMF • Place and Date: Quang Tri Province, Republic of Vietnam, 30 March 1967 Citation: For conspicuous gallantry and intrepidity at the risk of his life above and beyond the call of duty. Company 1 was establishing night ambush sites when the command group was attacked by a reinforced North Vietnamese company supported by heavy automatic weapons and mortar fire. 2d Lt. Bobo immediately organized a hasty defense and moved from position to position encouraging the outnumbered marines despite the murderous enemy fire. Recovering a rocket launcher from among the friendly casualties, he organized a new launcher team and directed its fire into the enemy machine gun positions. When an exploding enemy mortar round severed 2d Lt. Bobo's right leg below the knee, he refused to be evacuated and insisted upon being placed in a firing position to cover the movement of the command group to a better location. With a web belt around his leg serving as a tourniquet and with his leg jammed into the dirt to curtain the bleeding, he remained in this position and delivered devastating fire into the ranks of the enemy attempting to overrun the marines. 2d Lt. Bobo was mortally wounded while firing his weapon into the main point of the enemy attack but his valiant spirit inspired his men to heroic efforts, and his tenacious stand enabled the command group to gain a protective position where it repulsed the enemy onslaught. 2d Lt. Bobo's superb leadership, dauntless courage, and bold initiative reflected great credit upon himself and upheld the highest traditions of the Marine Corps and the U.S. Naval Service. He gallantly gave his life for his country.
(about 500 feet away); The Red Coach Inn / Annex Building (about 500 feet away). Touch for a list and map of all markers in Niagara Falls. 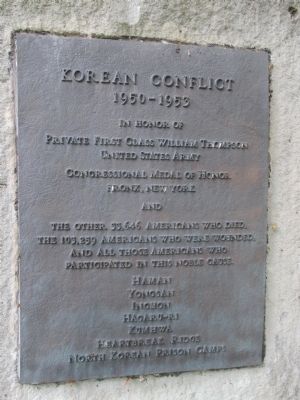 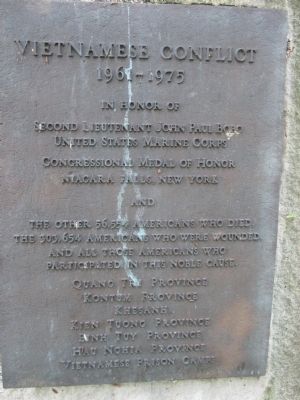 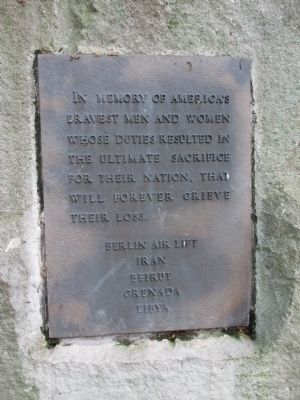 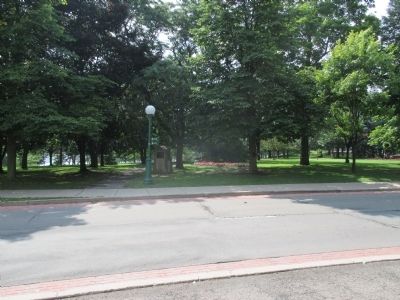 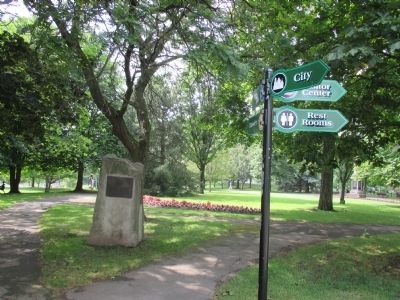 Photographed By Anton Schwarzmueller, July 7, 2014
8. Niagara County Medal of Honor Monument Marker
Base of tall Town of Niagara Civil War Monument can be seen in background at right. 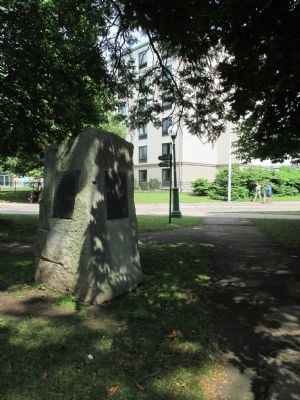