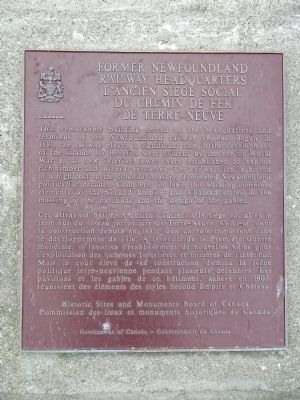 English
This remarkable building served as the headquarters and terminus of the Newfoundland railway system. Begun in 1881, the railway played a significant role in the development of the island. Its benefits were evident by the eve of World War 1, as new interior towns were established to exploit rich timber and mineral resources. The railway line, achieved at high cost to the colonial treasury, dominated Newfoundland politics for decades. Completed in 1903, this building combines elements of the Second Empire and Château styles in the massing of the pavilions and the design of the gables.

Photographed By Barry Swackhamer, June 22, 2014
2. Former Newfoundland Railway Headquarters Marker
The marker is at the right end of the building/

Topics and series. This historical marker is listed in this topic list: Railroads & Streetcars. In addition, it is included in the Canada, Historic Sites and Monuments Board series list. A significant historical year for this entry is 1881. 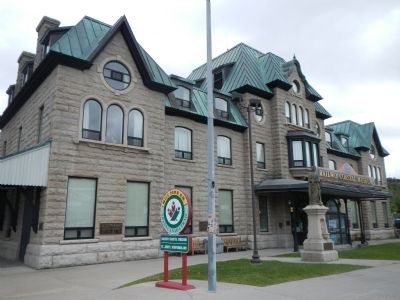 Photographed By Barry Swackhamer, June 22, 2014
3. Former Newfoundland Railway Headquarters
The Newfoundland railway operated for a little over a century. From 1882-97 the trains ran over completed portions of a projected trans-insular line. The first passenger train across the island ran in June 1898. Regular passenger service ceased in July 1969, and the last freight ran in June 1988. The railbed has since been designated a "T'railway" and a linear provincial park. (Submitted on November 23, 2014, by Barry Swackhamer of Brentwood, California.)

2. Railway Coastal Museum - Wikipedia. The building was designated a National Historic Site of Canada in 1988 for its role in commemorating the important role played by the Newfoundland Railway in the social, economic and political history of the province It was also designated a Heritage Railway Station in 1990. (Submitted on November 23, 2014, by Barry Swackhamer of Brentwood, California.) 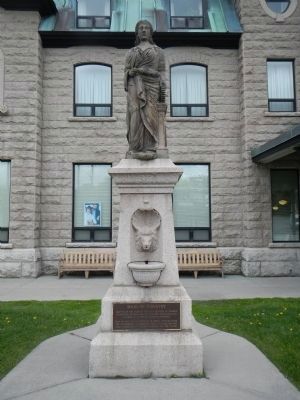 Photographed By Barry Swackhamer, June 22, 2014
4. The Maid of Industry statue
Maid of Industry
Erected at the turn of the 20th century by Charlie Henderson, stonemason for the Reid Newfoundland Railway, as a tribute to his co-workers.
Miss Francis (Fanny) Quinlan of North Arm Holyrood, the Henderson’s housekeeper, who later became Mrs. John Gushue of Whitbourne, modeled for the statue. 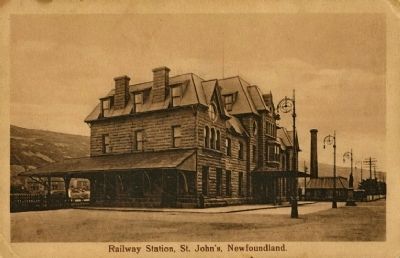