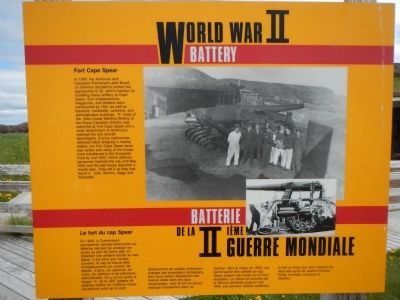 English
In 1940, the American and Canadian Joint Board of Defence decided to protect the approaches to St. John’s harbour by installing heavy artillery at Cape Spear. Gun emplacements, magazines, and shelters were constructed by 1941 as well as barracks, messhalls, canteens, and administration buildings. “A” troop of the 103rd Coast Defence Battery of Royal Canadian Artillery was stationed at Fort Cape Spear and a small detachment of Americans manned the anti-aircraft searchlights. Enemy submarines attacked allied shipping in nearby waters, but Fort Cape Spear never saw action and many of the troops were transferred to the European front by mid-1943. Home defence personnel manned the site until May 1945 and the last troops departed a month later. They left it as they found it, “cold, clammy, foggy and miserable.” 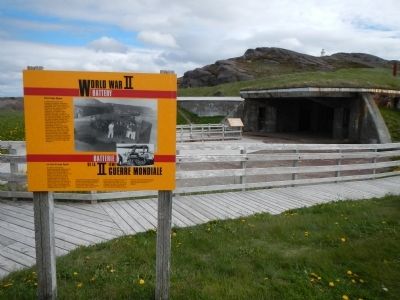 Topics. This historical marker is listed in these topic lists: Forts and Castles • War, World II. A significant historical year for this entry is 1940. 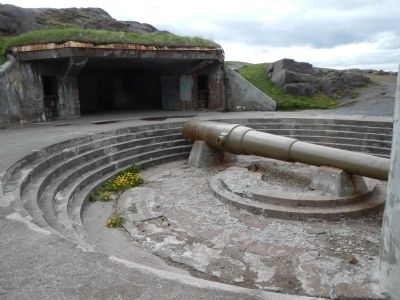 More about this marker. This battery is a short walk from the Cape Spear parking lot, near the point.

Also see . . .  Cape Spear - Wikipedia. Because of its proximity to convoy routes during the second World War, a gun battery was installed at Cape Spear to defend the entrance to St. John's harbor. Barracks and underground passages leading to the bunkers were built for the use of troops stationed there. (Submitted on December 8, 2014, by Barry Swackhamer of Brentwood, California.) 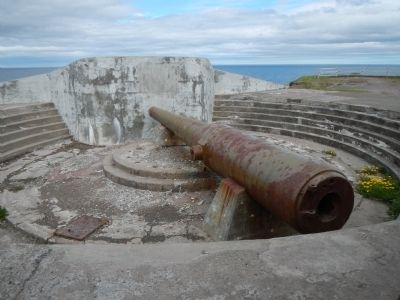 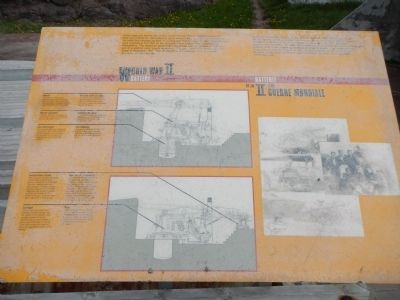 Photographed By Barry Swackhamer, June 22, 2014
5. "Disappearing" Gun panel
These huge gun barrels are all that remain of the Cape Spear wartime armament. They were known as “disappearing” guns because they could be lowered behind the protective concrete parapet for loading and maintenance. In 1896, these two guns were installed at Fort Mott on the Delaware River to guard the approaches to Philadelphia. The American government transferred them to Canada in 1941 as part of a wartime arms supply agreement. The guns were installed here at Cape Spear in November 1941. After World War II the carriages were dismantled and removed from the site.

This panel is too badly weathered to allow for further transcription of the text. Click on the image above to enlarge the panel. 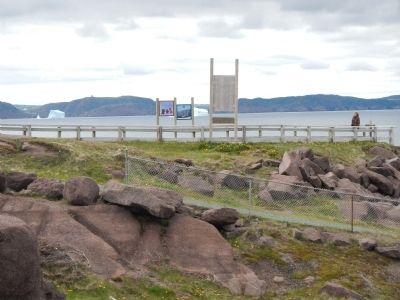 Photographed By Barry Swackhamer, June 22, 2014
6. Cape Spear, the eastern most point of Canada 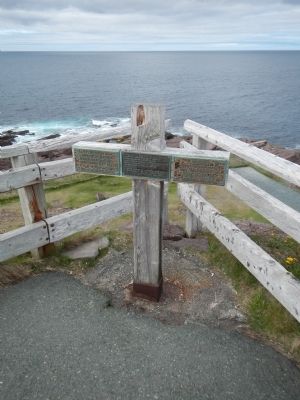 
This plaque was placed by Rose Goor in loving memory of his brother Donald Wilfred Harvey Goor of Golden Ridge Farm, Portugal Cove Road. Donnie was born on Aug. 31, 1946 and drowned at this point on Sept. 4, 1970.
He will alway be lovingly remembered as his parents, Walter & Hazel Cook, sister Sylvia, brother Ross and son Paul.