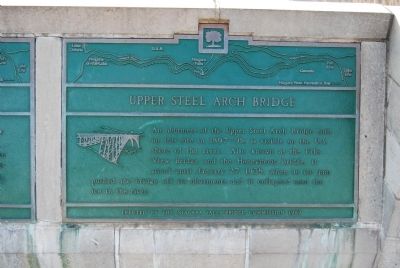 An abutment of the Upper Steel Arch Bridge built on this site 1897-98, is visible on the U.S. shore of the river. Also known as the Falls View Bridge and the Honeymoon Bridge, it stood until January 27, 1938, when an ice jam pushed the bridge off its abutments and it collapsed onto the ice in the river.

Topics. This historical marker is listed in this topic list: Bridges & Viaducts. A significant historical date for this entry is January 27, 1892. 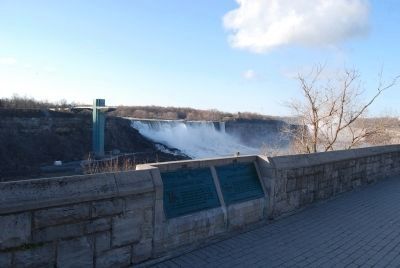 Photographed By Mike Wintermantel, April 21, 2013
2. Upper Steel Arch Bridge Marker
Marker is on the right...Upper Suspension Bridge marker is on the left.

Additional commentary.
1. Text of Poster shown in Photo No. 3.
Honeymoon Bridge Collapse. In winter, ice carried from the Great Lakes can become trapped in the lower gorge. It is forced up out of the water and freezes into a huge mass creating an “ice bridge,” that in years past could be as high as a 10-storey building. The ice bridge spans the river from shore to shore and usually forms in mid-January and lasts until April. In 1938 the immense strength of this ice bridge caused the Upper Steel Arch (Honeymoon) Bridge to collapse. Since 1964, an ice boom has been installed at Lake Erie to 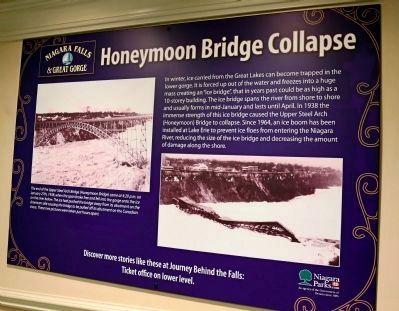 Photographed By J. J. Prats, October 16, 2014
3. Honeymoon Bridge Collapse Poster
This poster is located in the Table Rock Welome Center at the upper level passageway beyond the gift shop.
prevent ice floes from entering the Niagara River, reducing the size of the ice bridge and decreasing the amount of damage along the shore.

Photograph caption. The end of the Upper Steel Arch Bridge (Honeymoon Bridge) came at 4:20 p.m. on January 27, 1938, when the span broke free and fell into the gorge onto the ice on the river below. The ice had pushed the bridge away from its abutment on the American side, causing the bridge to be pulled off its abutment on the Canadian shore. These two pictures were taken just hours apart.
— Submitted December 21, 2014. 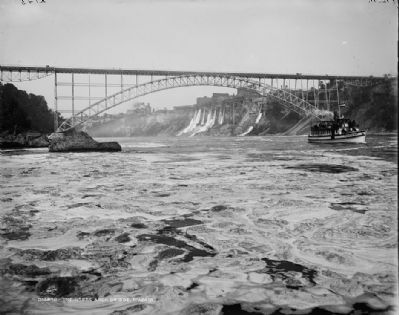