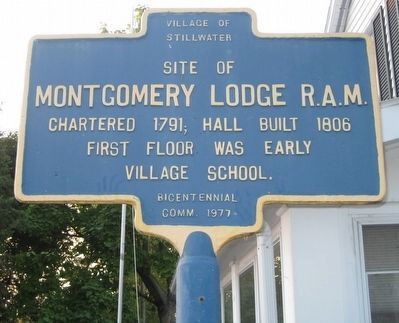 Erected 1977 by New York State Museum and the Village of Stillwater.

Topics. This historical marker is listed in these topic lists: Churches & Religion • Education. A significant historical year for this entry is 1791.

Other nearby markers. At least 8 other markers are within walking distance of this marker. Mead’s Tavern (within shouting distance of this marker); Ferry Lane (about 400 feet away, measured in a direct line); Dirck Swart House (about 600 feet away); Historic Sites (about 700 feet away); United Church (approx. 0.4 miles away); The Academy (approx. 0.4 miles away); Stillwater Blockhouse (approx. half a mile away); Gen. Henry Knox Trail (approx. 0.6 miles away). Touch for a list and map of all markers in Stillwater.
Credits. This page was last revised on June 16, 2016. It was originally submitted on December 30, 2014. This page has been viewed 178 times since then and 16 times this year. Photo   1. submitted on April 30, 2016. • Kevin W. was the editor who published this page.
Share this page.