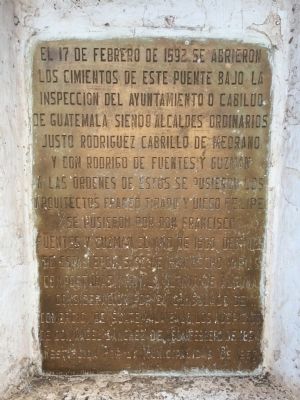 Photographed By J. Makali Bruton, January 18, 2015
1. Los Esclavos Bridge Marker
Inscription.
English translation: , Construction began on this bridge on February 17, 1592 by the Government of Guatemala under the Mayors Justo Rodríguez Cabrillo de Medrano. and Rodrigo de Fuentes y Guzmán. The architects were Franco Tirado and Diego Felipe. It was finished in 1600 by Francisco Fuentes y Guzmán. Since then it has been repaired numerous times, with the most serious repair done by the Commerce Commission under the direction of Ángel Sánchez de León in February 1854. It was restored again by the Municipality in 1957. . This historical marker is in Cuilapa Santa Rosa Guatemala