The Return of the Acadians 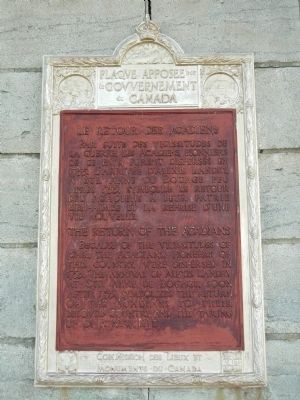 English:
Because of the vicissitudes of war, the Acadians, pioneers of this country, were dispersed in 1755. The arrival of Alexis Landry at Ste. Anne de Bocage, soon after 1755, symbolizes the return of the Acadians to their beloved country and the taking up of a new life.

Topics and series. This historical marker is listed in this topic list: Disasters. In addition, it is included in the Acadian History, and the Canada, Historic Sites and Monuments Board series lists. A significant historical year for this entry is 1755. 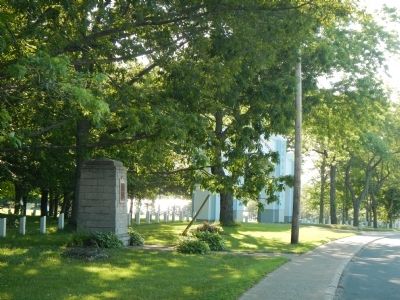 Photographed By Barry Swackhamer, July 15, 2014
2. The Return of the Acadians Marker

Click or scan to see
this page online
(New Brunswick Route 11) near Sainte Ann Street North, on the left when traveling east. Touch for map. Marker is at or near this postal address: 593 West St Peter Boulevard, Caraquet NB E1W 1A2, Canada. Touch for directions.

Other nearby markers. At least 1 other marker is within walking distance of this marker. Le Grand Dérangement (about 120 meters away, measured in a direct line).

More about this marker. This marker is located near the arch entrance to Sainte-Anne-du-Bocage Shrine.