in front of the Second Presbyterian Church 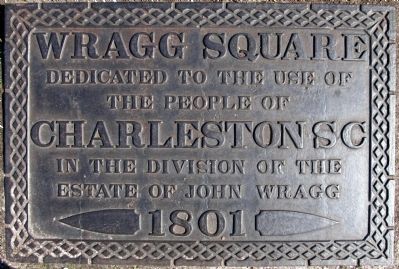 Photographed By Cathi Lee, January 30, 2015
1. Wragg Square Marker
Inscription.
Wragg Square. in front of the Second Presbyterian Church.
Wragg Square Dedicated To the Use Of The People Of Charleston SC In The Division Of The Estate Of John Wragg 1801. . This historical marker is in Charleston in Charleston County South Carolina

Topics. This historical marker is listed in this topic list: Charity & Public Work. A significant historical year for this entry is 1801.

Location. 32° 47.295′ N, 79° 56.096′ W. Marker is in Charleston, South Carolina, in Charleston County. Marker can be reached from Meeting Street, on the left when traveling south. This marker lays flat on the ground at the top of the steps from Meeting Street. It is at the entrance to the park. Wragg Square is very close to the Joseph Manigault House. It contains a sidewalk that leads directly to the Second Presbyterian Church. Touch for map. Marker is at or near this postal address: 341 Meeting Street, Charleston SC 29401, United States of America. Touch for directions.

Other nearby markers. At least 8 other markers are within walking distance of this marker. The Joseph Manigault House (within shouting distance of this marker); Wade Hampton Monument (about 300 feet away, measured in a direct line); The Charleston Museum's Joseph Manigault House (about 300 feet away); The Civil War Submarine, H.L. Hunley 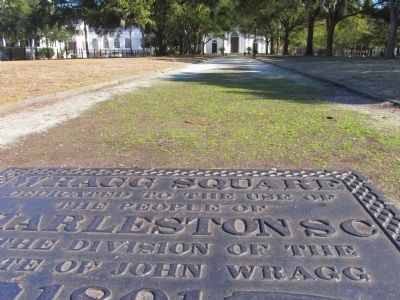 Photographed By Cathi Lee, January 1, 1980
2. Looking from the Wragg Square Marker to the Second Presbyterian Church 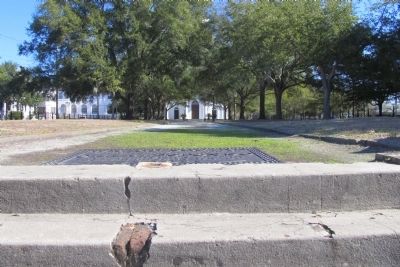