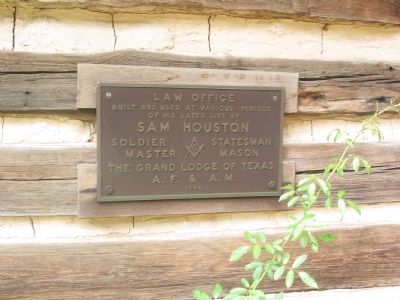 By Buildingshsu, July 3, 2007
1. Law Office of Sam Houston Marker
Inscription.
Law Office (Sam Houston). . Law office built and used at various periods of his later life by Sam Houston: Soldier, Statesman, Master Mason. . This historical marker was erected in 1964 by The Grand Lodge of Texas, A.F. & A.M.. It is in Huntsville in Walker County Texas

Location. 30° 42.897′ N, 95° 33.168′ W. Marker is in Huntsville, Texas, in Walker County. Marker can be reached from 19th Street near Avenue M. The Law Office is less than 0.1 mile north of 19th Street (near the intersection with Avenue M), within the Sam Houston Memorial Museum complex. Touch for map. Marker is in this post office area: Huntsville TX 77340, United States of America. Touch for directions. 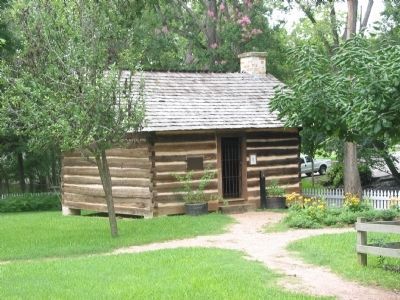 By Buildingshsu, July 3, 2007
2. Law Office of Sam Houston
away); Peabody Library Building (approx. 0.2 miles away); The Presidents Tree (approx. ¼ mile away); Josey Boy Scout Lodge (approx. 0.4 miles away). Touch for a list and map of all markers in Huntsville.

Regarding Law Office (Sam Houston). Built in 1848, Houston family tradition tells us that Houston’s law books and papers were kept in his office and that only Joshua, his trusted servant, was allowed in to “straighten up.”