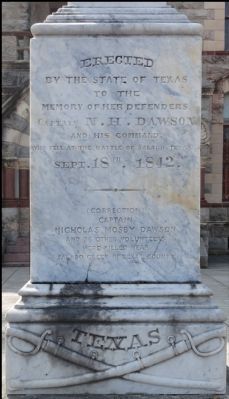 Erected
by the State of Texas
to the
memory of her defenders
Captain N. H. Dawson
and his command.
Who fell at the battle of Salado Texas
Sept. 18th, 1842.
—————————————————
(Correction)
Captain
Nicholas Mosby Dawson
and 36 other volunteers
were killed near
Salado Creek in Bexar County

Topics. This memorial is listed in these topic lists: Patriots & Patriotism • War, Texas Independence. A significant historical year for this entry is 1842.

Location. 29° 54.321′ N, 96° 52.699′ W. Marker is in La Grange, Texas, in Fayette County. Memorial is on North Washington Street south of West Colorado Street, on the right when traveling south. Touch for map. Marker is at or near this postal address: 151 N Washington St, La Grange TX 78945, United States of America. Touch for directions. 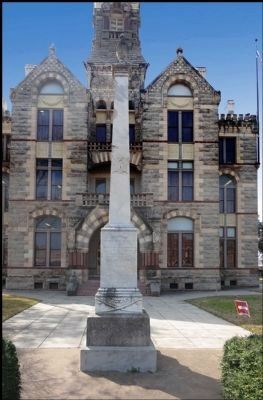 Click or scan to see
this page online
(within shouting distance of this marker); Birthplace of the SPJST (within shouting distance of this marker); Beer Office and Bottling Company (about 400 feet away, measured in a direct line); The First U.S. Postal Rural Mail Route in Texas (about 600 feet away); Site of a Twin Blockhouse (about 800 feet away); City Library Building (approx. ¼ mile away); Bradshaw-Killough House (approx. ¼ mile away). Touch for a list and map of all markers in La Grange.

More about this memorial. I've never seen a monument with a retraction before.

Additional commentary.
1. First Official Texas State Historical Monument
The Texas Historical Commission, in its "History of State of Texas Historical Markers", proclaims this marker as the first official state historical monument. The state placed the monument at the Fayette County Courthouse in 1884 to honor the fallen men of the "Dawson Massacre" and the "Black Bean Lottery" of the Texas Revolution. A.J. Adkisson & Son completed the Italian marble obelisk on a limestone base.
— Submitted September 16, 2016, by Duane Hall of Abilene, Texas.
Credits. This page was last revised on September 17, 2016. It was originally submitted on February 14, 2015, by Jim Evans of Houston, Texas. This page has been viewed 507 times since then and 8 times this year. Photos:   1, 2. submitted on February 14, 2015, by Jim Evans of Houston, Texas. • Bernard Fisher was the editor who published this page.
Share This Page.