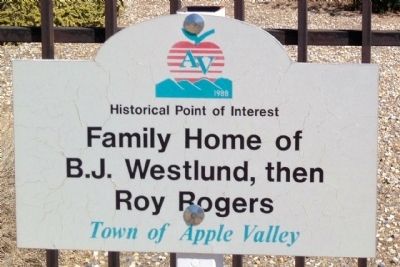 Erected 1988 by the Town of Apple Valley.

Regarding Family Home of B.J. Westlund, then Roy Rogers.
From the Apple Valley Historical Advisory Committee:

Along outer Highway 18 in Apple Valley sits an 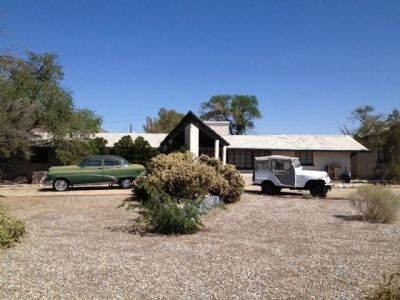 By Mark Hilton, September 19, 2012
2. Family Home of B.J. Westlund, then Roy Rogers
old adobe home which has a history as diverse as the desert landscape view from the back yard. Built in 1949, the original four bedrooms and two baths were first occupied by Bud Westlund, co-founder of Apple Valley and partner of Newt Bass. It was a beautiful home, large for its time, with beamed ceilings and custom rock roof. Newly revised covenant restrictions kept the surrounding Joshua trees in place.

In the olden days, the Westlund home was an Apple Valley landmark. From Victorville, visitors were told to “travel quite a ways across the narrows bridge until you come to the adobe home on the left side—that’s where
Apple Valley begins.”

During the early 1960s extensive renovation was completed, turning the home into an estate property. A master suite, bath and dressing rooms were added. A floor-toceiling aviary was built in the hall going to the master bedroom, which also contained a grand piano. The original garage became a den.

Planning to buy a home in Palm Springs, Roy Rogers and Dale Evans visited Apple Valley on Newt’s invitation. They purchased the Westlund home in 1965 and lived there until 1980. They added a large garage for limos, a workshop, stables, corrals and a practice ring for horsemanship on the outlying property.

Highway 18, as the location for the Rogers’ home, Roy Rogers Inn (Apple Valley Inn) and 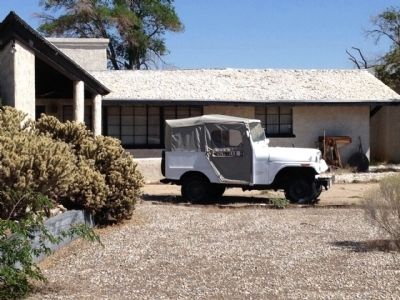 By Mark Hilton, September 19, 2012
3. Roy Rogers Jeep at family home.
the Roy Rogers
Museum (now Gold Strike Lanes), was renamed Happy Trails Highway in 1994, in recognition of the contributions Roy and Dale have made to Apple Valley.

Memories of Roy and Dale linger. Fans can see the storage rooms where Dale hung her costumes, the wagon wheel and tack Roy placed in the front yard, and Roy’s central sound system with instructions in his handwriting.

The current owner bought the home in 1990 and has kept the traditional antique and western décor. The owner has also purchased items from sales of the famous couples’ belongings, including costumes, furniture and other memorabilia, bringing history back home to roost. This home is an important part of Apple Valley’s heritage. 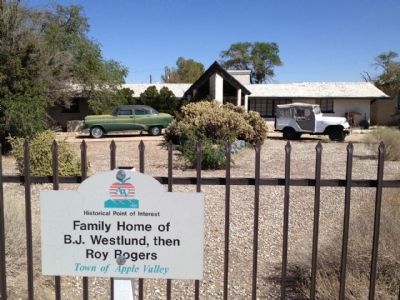 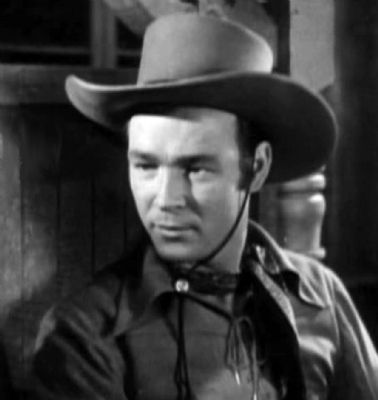