Life in Virginia City on the Comstock Lode 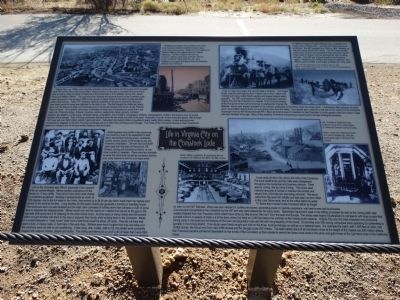 Virginia City, circa. 1880’s, was a bustling industrial community of about 25,000 people which included Gold Hill and the Silver City communities. Gold and silver mining was a corporate environment that was owned by either the bank of California or the partnership of John Mckay, James Fair, James Flood and William O’Brien. The gold and silver deposits that became known as the Comstock Lode were discovered in the spring of 1859 by two groups of placer miners at the head of what was later called Gold Canyon. Henry T.P. Comstock claimed ownership of the ground where the discovery was made hence his name was attached to this body of ore. The find brought the California miners back over the Sierras to settle and eventually grow a community that became known as the “Richest Place on Earth”. An industrial community, it consisted of every sort of business you could find in any major city of this size today. Schools, churches, saloons, restaurants, hotels, grocers, butchers, jewelers, gun dealers, lumber yards, hardware stores, undertakers, stock brokers, newspapers, clothiers, photographers, builders and masons and, of course brothels and 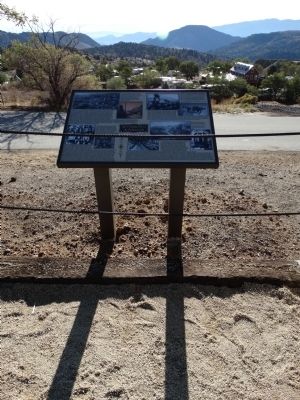 By Denise Boose, September 29, 2014
2. Life in Virginia City on the Comstock Lode Marker

Click or scan to see
this page online
a railroad. Truly a thriving community that was driven by the mines and mill of the area. Production from the mines during the period 1860 through 1910 was well over $400 million dollars in gold and silver. Calculated into today’s dollars it equates to nearly twenty billion dollars. A stock exchange was connected by telegraph to the San Francisco exchange and on to New York via Denver and Chicago. The mines of the Comstock became a major investment option for investors both in the new United States as well as Europe.

Retail business was prolific in the community. You could buy most of the essentials for daily life in well stocked clothing stores, hardwares, lumber, stoves, paints; or be buried by any one of several undertakers. Life was hard and death came early from the likes of Pneumonia, TB, Cholera, mining and industrial accidents, or any other number of maladies. There were two hospitals to serve the community as well as numerous doctors and many lawyers to tend to your legal needs.

Life on the Comstock was difficult, especially if you compare it to our current lifestyle. Miners worked underground in the mines on 12 hour shifts. They did not have fancy work clothes or protective equipment. Working in temperatures as much as 120 degrees, due to the hot water in the mines, they earned up to $4.00 per day which made them the highest paid miners in the world 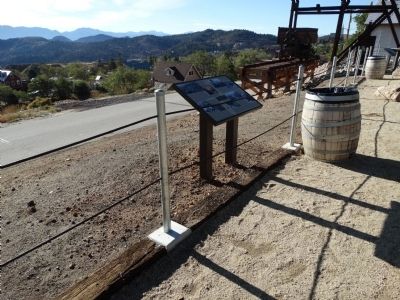 By Denise Boose, September 29, 2014
3. Life in Virginia City on the Comstock Lode Marker
at the time. Living facilities for the single miners was generally a rooming or boarding house. The structures were not well insulated and the walls often consisted of nothing more than canvass or cloth of some type to separate the sleeping areas. Miners would only rent the rooms for a twelve hour period as the guy on the opposite shift would rent it for sleeping for the other twelve hours. As time went on many miners and mill workers either brought families with them to the area or acquired their family while working here on the Comstock. Meals in a small restaurant or “chop house” (their form of fast food) would be about .25 cents. They did not have nice warm boots, or heavy coats, or hard hats in the early days. Winters were much tougher than they are today and the summers were hot with no air conditioning. It was noisy, dirty, muddy, cold, or hot, the streets were constantly clogged with wagons, horses, people and mules. The milling operations put up such a din of noise that it was often difficult to talk in normal tones. The mills pounding and the underground explosions often created a ground vibration.

Freighting and stage lines provided much of the early food and products needed to keep a large community moving along. Meats from the Dayton and Washoe Valleys and veggies from the Truckee Meadows. The finer things in life such as furniture, clothing,

By Denise Boose, September 29, 2014
4. Photo Displayed on Marker
other food products, alcohol, shoes, hardware, metal products, etc. were freighted in by wagon and teams from all direction, primarily San Francisco.

In 1869 the Virginia & Truckee Railroad was completed from Carson City to Virginia City….and later on to Reno and south to Minden. The V&T operated from 1869 to 1950. Meeting up with the Central Pacific RR in Reno. The V&T was primarily built to haul ore from the Comstock to mills along the Carson Rivers south of Virginia City thus reducing the cost of milling the ores. The V&T was of great benefit to the Comstock region. Owned by Wm Ralston (the Bank of California), Wm. Sharon and D.O. Mills, it was highly profitable for many years.

It ran 21 miles into Carson City and 52 miles in to Reno. The Geiger Grade, now the main highway from Virginia City to Reno, which was crowded with many-muled freight wagons and stages became easily passable. The V&T could transport freight and passengers between Virginia City and San Francisco in a speedy 12 to 16 hours bringing all the fine goods of the east and Europe to sophiscated Virginia City. Weather was an ever present problem for the railroad, particularly in the winter when the snows came. Locomotives often became de-railed which necessitated digging them out and righting them onto the tracks. The railroad was a vital link to the rest of the country for the Comstock. 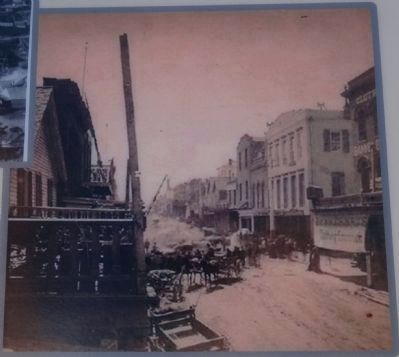 By Denise Boose, September 29, 2014
5. Photo Displayed on Marker
Passenger travel to the transcontinental RR in Reno provided access for travelers to San Francisco or to the eastern cities and coast to meet with ship transport to Europe. Many of the wealthier Comstock entrepreneurs would travel to Europe looking for investors.

It was really all about the mines and mills of the Comstock. The mine headframes and the mills were interspersed throughout the residential and business districts. There was no zoning, like we know it today. The mines used massive amounts of lumber to buttress the tunnels and stopes from which the ore was being removed. The wood came from the local hills initially and was later cut and milled in the Lake Tahoe area, sent to the valley below by water “V” flume then trucked to the Comstock either by freight or, later, by the V&T Railroad. Wood was also needed for building structures, generating steam to operate equipment, and heat homes and businesses. Coal was also transported to the Comstock by the V&T and was used extensively for many years. Specialized equipment used in the milling processes as well as the mining itself, was usually obtained from San Francisco which would have come by ship around “the horn” from the east and Europe. The mines were highly industrialized in complexity with large pumps that pumped millions of gallons of water out of the deep mines (as deep as 3,000 feet 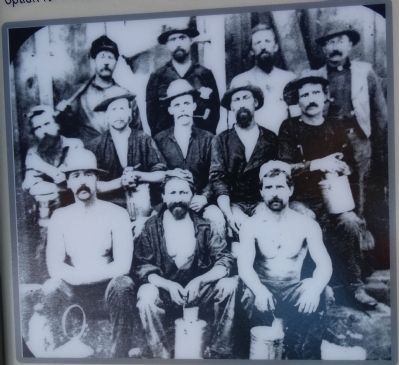 By Denise Boose, September 29, 2014
6. Photo Displayed on Marker
below the surface) so the mining could continue. Virginia City was the most important and productive mining camp in the world but the fortunes of the town and population rose and fell with the prosperity of the mines. As one time over 400 mining companies were operating (or pretending to operate) in the mining district. Their stocks were freely bought and sold on the three local exchanges as well as on national basis. For example the Ophir, with 1,400 feet of claim had 16,800 shares, the Gould and Curry had 4,800 shares and the Savage some 800 shares. The total market value of all Comstock mines at the height of the marker was $40 million dollars. San Francisco became somewhat dependent on the mines of the Comstock as their residents owned ten times more stock in the silver and gold mines of the Comstock than in the California mines.

Topics. This historical marker is listed in these topic lists: Industry & Commerce • Settlements & Settlers. A significant historical year for this entry is 1859. 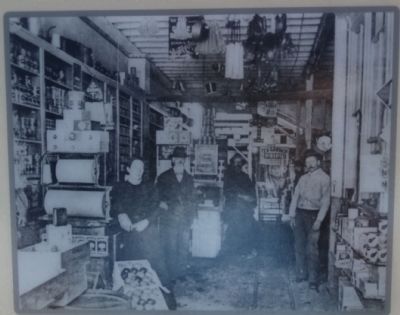 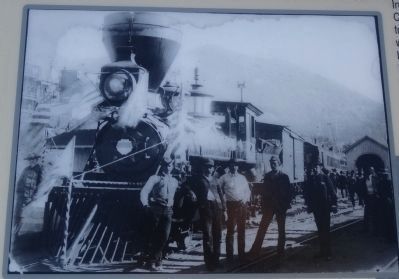 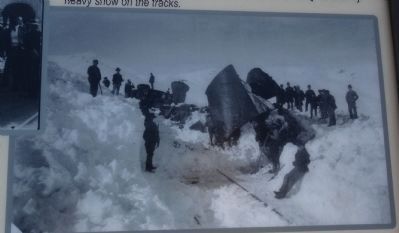 By Denise Boose, September 29, 2014
9. Photo Displayed on Marker
A locomotive being dug out of the snow after being derailed by heavy snow on the tracks. 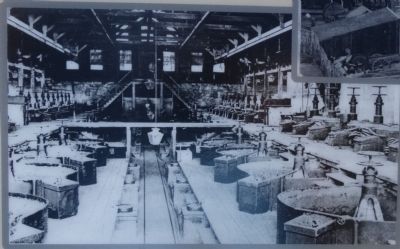 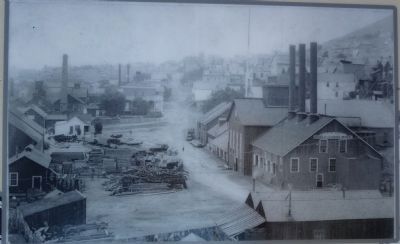 By Denise Boose, September 29, 2014
11. Photo Displayed on Marker
The Bonner Shaft which was located on South D. St. at Washington St, where the Grammar School is today. 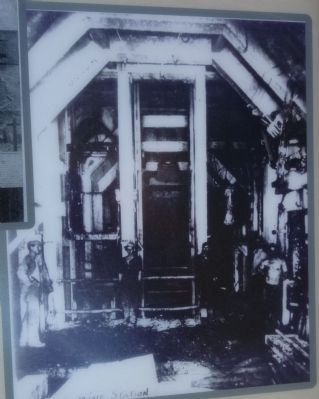