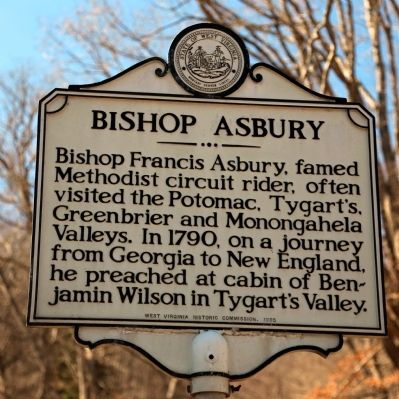 By J. J. Prats, March 15, 2015
1. Bishop Asbury Marker
Inscription.
Bishop Asbury. . Bishop Francis Asbury, famed Methodist circuit rider, often visited the Potomac, Tygart’s, Greenbrier, and Monongahela Valleys. In 1790, on a journey from Georgia to New England, he preached at cabin of Benjamin Wilson in Tygart’s Valley. . This historical marker was erected in 1965 by West Virginia Historic Commission. It is in Huttonsville in Randolph County West Virginia

Bishop Francis Asbury, famed Methodist circuit rider, often visited the Potomac, Tygart’s, Greenbrier, and Monongahela Valleys. In 1790, on a journey from Georgia to New England, he preached at cabin of Benjamin Wilson in Tygart’s Valley.

Topics and series. This historical marker is listed in this topic list: Churches & Religion. In addition, it is included in the Francis Asbury, Traveling Methodist Preacher ⛪, and the West Virginia Archives and History series lists. A significant historical year for this entry is 1790. 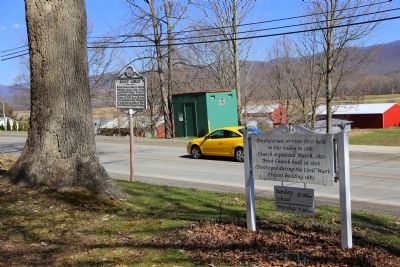 More about this marker. The marker face is parallel to the roadway, making it difficult to spot from a moving car.

Also see . . .
1. Wikipedia entry for Francis Asbury. Asbury became a local lay preacher for Methodist meetings at age 18. At age 22, John Wesley appointed him as a traveling preacher. His boyhood home still stands and is open as a museum in West Bromwich, England. In 1771 he volunteered to travel to America. When the American War of Independence broke out in 1776, he was the only Methodist minister to remain in America. Within the first 17 days of being in the colonies, he had preached in Philadelphia and New York. During the first year he was Wesley’s assistant and preached in 25 different settlements. In 1780, he met the freedman "Black Harry" Hosier, a meeting Asbury considered "providentially arranged". Hosier served as his driver and guide and, though illiterate, memorized long passages of the Bible while Asbury read them aloud during their 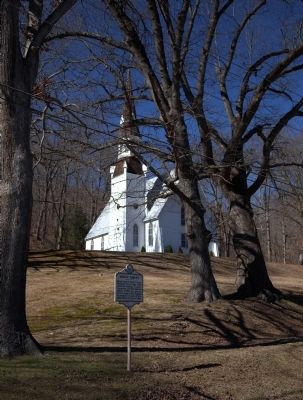 By J. J. Prats, March 15, 2015
3. Tygart’s Valley Presbyterian Church and Marker
travels. He eventually became a famous preacher in his own right, the first African American to preach directly to a white congregation in the United States. (Submitted on April 9, 2015.)

2. Wikipedia entry for Tygarts Valley Church. “The church measures 61 feet by 31 feet and features a 105 foot tall spire. It was listed on the National Register of Historic Places in 1986.” “The current building, dedicated in 1883, replaces the original building, known as the Old Brick Church, or the Brick Church. The Brick Church was destroyed by Union Forces during the Civil War, who wanted (and needed) the bricks for their winter encampment on nearby Cheat Mountain. There is a historical marker on Cheat Mountain identifying the site of the winter encampment and documenting the use of the bricks from the church. The Brick Church sat on a knoll south of Huttonsville, on land that is now surrounded by the W. Va. State Correctional Center.” (Submitted on April 9, 2015.)
Credits. This page was last revised on June 16, 2016. It was originally submitted on April 9, 2015, by J. J. Prats of Powell, Ohio. This page has been viewed 371 times since then and 5 times this year. Photos:   1, 2, 3. submitted on April 9, 2015, by J. J. Prats of Powell, Ohio.
Share This Page.