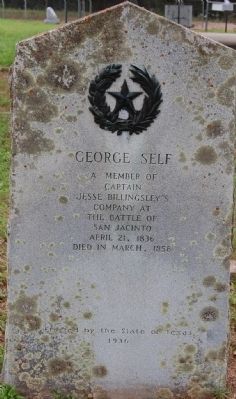 Photographed By Keith Peterson, July 29, 2007
1. George Self Marker
Inscription.
George Self. .
A member of Captain Jesse Billingsley’s company at the Battle of San Jacinto April 21, 1836 Died in March, 1856.. . This historical marker was erected in 1936 by State of Texas. It is in Webberville in Travis County Texas

A member of
Captain
Jesse Billingsley’s
company at
the Battle of
San Jacinto
April 21, 1836
Died in March, 1856.

Topics and series. This historical marker is listed in this topic list: War, Texas Independence. In addition, it is included in the Texas 1936 Centennial Markers and Monuments series list. A significant historical month for this entry is March 1856. 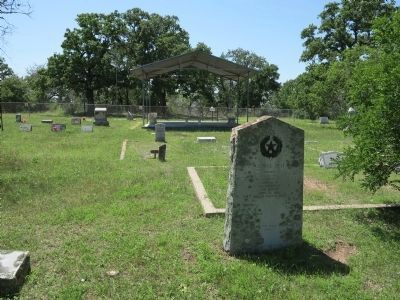 More about this marker. The marker and gravesite are located at the Joseph J. Manor Cemetery.

Related marker. Click here for another marker that is related to this marker. A Captain Jesse Billingsley Marker.