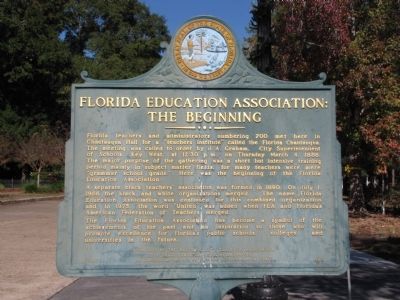 Florida teachers and administrators numbering 700 met here in Chautauqua Hall for a "teachers institute" called the Florida Chautauqua. The meeting was called to order by J.A. Graham, City Superintendent of Schools, Key West, at 12:30 p.m., on Thursday March 4, 1886. The major purpose of the gathering was a short but intensive training period mainly in subject matter fields, for many teachers were mere "grammar school grads." Here was the beginning of the Florida Education Association.

A separate black teachers' association was formed in 1890. On July 1, 1966 the black and white organizations merged. The name Florida Education Association was continued for this combined organization, and in 1975, the work "United" was added when FEA and Florida's American Federation of Teachers merged.

The Florida Education Association has become a symbol of the achievements of the past and an inspiration to those who will promote excellence for Florida's public schools, colleges, and universities in the future. 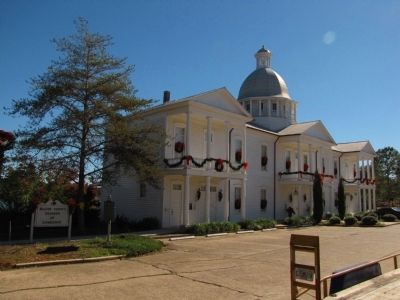 Click or scan to see
this page online
in cooperation with the Florida Department of State. (Marker Number F-307.)

Topics. This historical marker is listed in these topic lists: African Americans • Education. A significant historical date for this entry is March 4, 1812.

Other nearby markers. At least 8 other markers are within 11 miles of this marker, measured as the crow flies. The Chautauqua Hall of Brotherhood (within shouting distance of this marker); Walton-DeFuniak Library (about 400 feet away, measured in a direct line); Florida's First Confederate Monument (approx. 0.4 miles away); Walton County Confederate Monument (approx. 0.4 miles away); Cosson Family Tragedy (approx. 5.6 miles away); Eucheeanna Community (approx. 6.7 miles away); Euchee Valley Presbyterian Church And Cemetery (approx. 8.1 miles away); Knox Hill Academy (approx. 10.8 miles away). Touch for a list and map of all markers in DeFuniak Springs.
Credits. This page was last revised on June 16, 2016. It was originally submitted on January 17, 2011, by Lee Hattabaugh of Capshaw, Alabama. This page has been viewed 648 times since then and 17 times this year. Last updated on May 8, 2015, by Paul Fehrenbach of Germantown, Wisconsin. Photos:   1, 2. submitted on January 17, 2011, by Lee Hattabaugh of Capshaw, Alabama. • Bill Pfingsten was the editor who published this page.
Share this page.