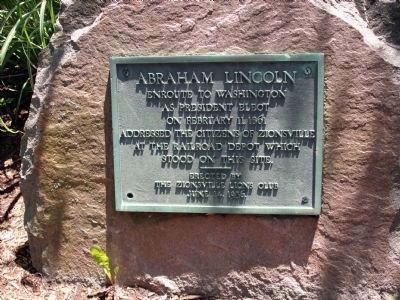 Photographed By Al Wolf, June 14, 2008
1. Lincoln's Stop in Zionsville, Indiana Marker
On the South end of Lincoln Park sits this marker. Lincoln Park is a small pocket park. It is one block long and about half a block wide. It has many shade trees and features that allow the community and visitors a place to enjoy themselves and the Town. The park was named to honor Abraham Lincoln's stop in Zionsville on February 11, 1861.
Inscription.
Lincoln's Stop in Zionsville, Indiana. . Abraham Lincoln enroute to Washington as President Elect on February ll, 1861 addressed the Citizens of Zionsville at the Railroad Depot which stood on this site. . This historical marker was erected in 1956 by Zionsville Lions Club. It is in Zionsville in Boone County Indiana

Abraham Lincoln enroute to Washington as President Elect on February ll, 1861 addressed the Citizens of Zionsville at the Railroad Depot which stood on this site.

Topics and series. This historical marker is listed in these topic lists: Government & Politics • Railroads & Streetcars. In addition, it is included in the Former U.S. Presidents: #16 Abraham Lincoln, and the Lincoln 1861 Inaugural Train Stops series lists. A significant historical year for this entry is 1861.

Location. 39° 57.045′ N, 86° 15.754′ W. Marker is in Zionsville, Indiana, in Boone County. Marker can be reached from the intersection of South First Street and West Oak Street, on the left when traveling north. Inside "Lincoln Park" sits the marker a few steps off the sidewalk. Touch for map. Marker is in this post office area: Zionsville IN 46077, United States of America. Touch for directions.

Other nearby markers. At least 8 other markers are within 8 miles of this marker, measured as the crow flies. Town of Zionsville Founded in 1852 (about 300 feet away, measured in a direct line); Site of the Old Zionsville Inn (about 400 feet away); Patrick H. Sullivan 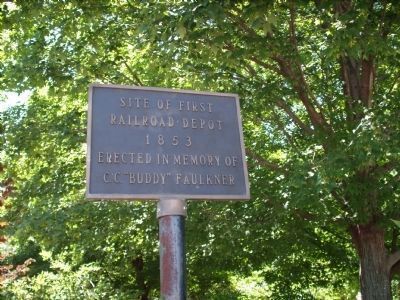 Photographed By Al Wolf, June 14, 2008
2. Zionsville First Railroad Station Location.
At the North/East corner of Lincoln Park was the "Site of first Railroad Depot 1853. Erected in memory of C. C. "Budy" Faulkner." The first Depot was located in the middle of Cedar Street and South First Street. It had to be moved to correct problems of traffic and passenger protection. 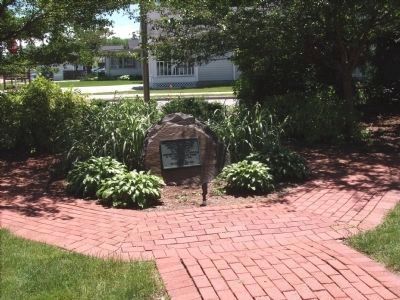 Photographed By Al Wolf, June 14, 2008
3. Marker at a distance in Lincoln Park.
Looking south - West Oak Street can be seen behind the Marker. Parking is free and easy on South First Street. 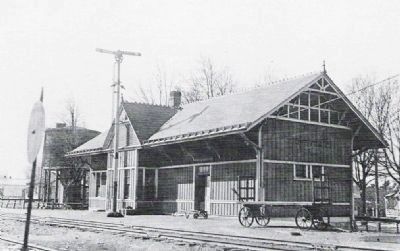 Photographed By Circa 1870
4. Zionsville Railroad Station.
In 1861 Zionsville population was 360 people. It grew up with the railroad as part of its down town location. 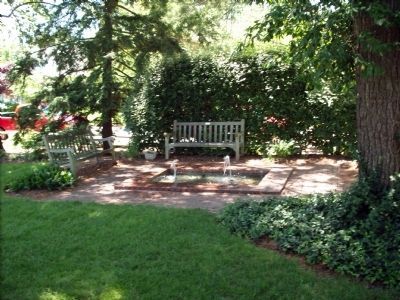 Photographed By Al Wolf, June 14, 2008
5. Water fountain in Lincoln Park.
The fountain and benches are mid way through the small park. South Second Street is directly behind the fountain. 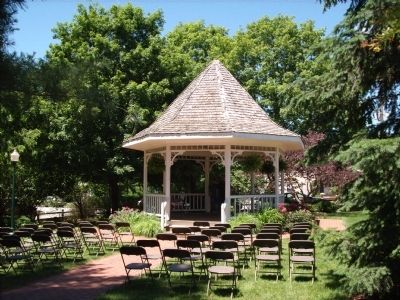 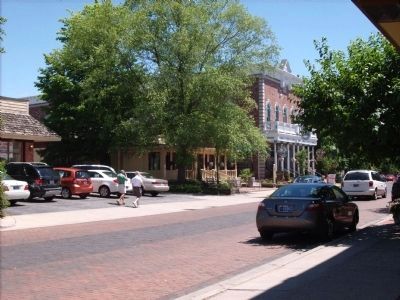