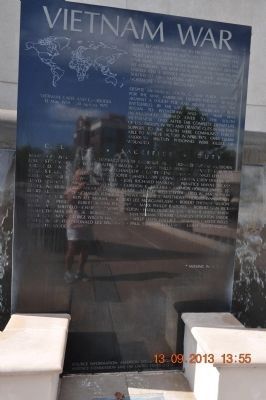 What began as an effort to prevent a communist takeover of South Vietnam evolved into the most divisive war in American History since the Civil War. Starting with American troops serving as advisors, the war escalated until over 500,000 United States service personnel were serving in Southeast Asia, battling Viet Cong Guerillas and North Vietnamese Regulars.

Despite dwindling political and public support for the war, American troops fought bravely against a tough foe and never lost on the battlefield. By the late 1960s, American forces began to withdraw and the war was increasingly turned over to the South Vietnamese. Only after the complete departure of U.S. troops in 1973 and drastic cuts in military support to the south were communist forces able to achieve victory in April 1975. Over 350,000 American military personnel were killed or wounded.

Erected 2011 by The Veterans Memorial Foundation.