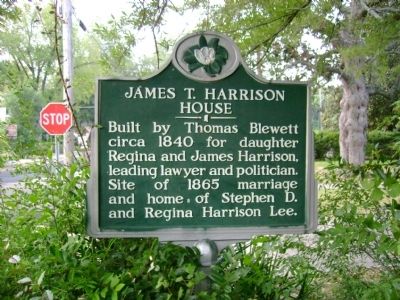 Built by Thomas Blewett circa 1840 for daughter Regina and James Harrison, leading lawyer and politician. Site of 1865 marriage and home of Stephen D. and Regina Harrison Lee.

Topics. This historical marker is listed in this topic list: Government & Politics. A significant historical year for this entry is 1840.

Click or scan to see
this page online
James Thomas Harrison (1811–1879), son of Thomas Harrison and Hannah Earle, was born near Pendleton, South Carolina, in 1811. He graduated from the University of South Carolina in 1829 and studied law under James L. Pettigru. In 1834, he moved to Mississippi, settled in Columbus, and began the practice of law. He was a delegate to the convention of southern states that met in Montgomery, Alabama, in 1861 and was a member of the Confederate Congress throughout its existence. After the war, he was elected to the United States Congress but was refused admittance. He returned to the practice of law and died in Columbus, Mississippi, in 1879.

Editor’s want-list for this marker. A photograph of the marker and the surrounding area in context. • Can you help?
Share this page.