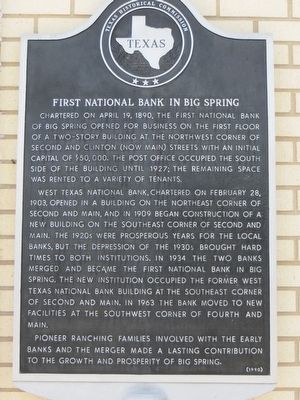 Chartered on April 19, 1890, the First National Bank of Big Spring opened for business on the first floor of a two-story building at the northwest corner of Second and Clinton (now Main) streets with an initial capital of $50,000. The post office occupied the south side of the building until 1927; the remaining space was rented to a variety of tenants.

Pioneer ranching families involved with the early banks and the merger made a lasting contribution to the growth and prosperity of Big Spring. 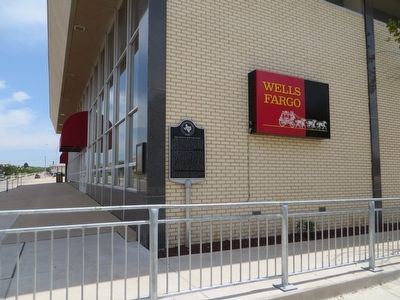 Topics. This historical marker is listed in this topic list: Industry & Commerce. A significant historical date for this entry is February 28, 1903.

Other nearby markers. At least 8 other markers are within walking distance of this marker. Howard County (within shouting distance of this marker); Settles Hotel (about 600 feet away, measured in a direct line); The Seventh Earl of Aylesford (about 600 feet away); A Historical Big Spring Meat Market (approx. 0.2 miles away); Big Spring Hardware Company (approx. 0.2 miles away); The J. & W. Fisher Company (approx. 0.2 miles away); Potton House (approx. 0.2 miles away); First Christian Church (approx. half a mile away). Touch for a list and map of all markers in Big Spring.
Credits. This page was last revised on June 16, 2016. It was originally submitted on August 2, 2015, by Bill Kirchner of Tucson, Arizona. This page has been viewed 307 times since then and 42 times this year. Photos:   1, 2. submitted on August 2, 2015, by Bill Kirchner of Tucson, Arizona. • Bernard Fisher was the editor who published this page.
Share this page.