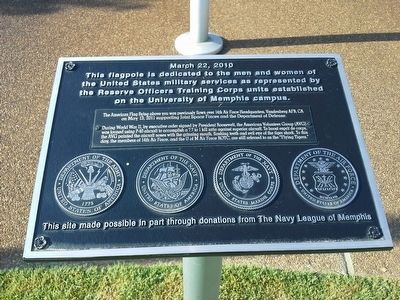 The American Flag flying above you was previously flown over 14th Air Force Headquarters, Vandenberg AFB, CA on May 13, 2011 supporting Joint Space Forces and the Department of Defense. During World War II, by executive order signed by President Roosevelt, the American Volunteer Group (AVG)was formed using P-40 aircraft to accomplish a 7.7 to 1 kill ratio against superior aircraft. To boost esprit de corps, the AVG painted the aircraft noses with a grinning mouth, flashing teeth and evil eye of the tiger shark. To this day, the members of the 14th Air Force, and the U of M Air Force ROTC, are still referred to as the "Flying Tigers"

Erected 2010 by The navy League of Memphis.

Topics. This memorial is listed in this topic list: War, World II. A significant historical month for this entry is May 1654.

Location. 35° 7.104′ N, 89° 56.228′ W. Marker is in Memphis, Tennessee, in Shelby County. Memorial is on Walker Avenue. Flagpole is on the grounds of the University of Memphis. Touch for map. Marker is in this post office area: Memphis TN 38111, United States of America. Touch for directions. 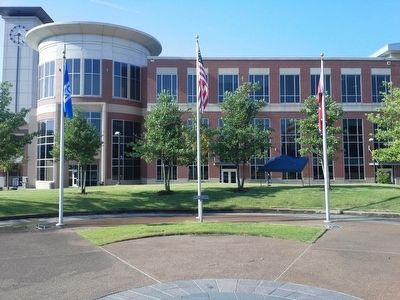 By Steve Masler, August 4, 2015
2. This flagpole is dedicated to the men and women of the United States military services Marker

Click or scan to see
this page online
Tom (about 300 feet away, measured in a direct line); J. Millard "Jack" Smith (about 500 feet away); Normal Depot (approx. 0.2 miles away); Normal Station Neighborhood (approx. 0.4 miles away); The University of Memphis (approx. 0.4 miles away); Second Presbyterian Church (approx. 0.7 miles away); William G. Leftwich, Jr. Memorial (approx. 0.9 miles away). Touch for a list and map of all markers in Memphis.
Credits. This page was last revised on June 16, 2016. It was originally submitted on August 4, 2015, by Steve Masler of Memphis, Tennessee. This page has been viewed 217 times since then and 2 times this year. Photos:   1, 2. submitted on August 4, 2015, by Steve Masler of Memphis, Tennessee. • Bill Pfingsten was the editor who published this page.
Share This Page.