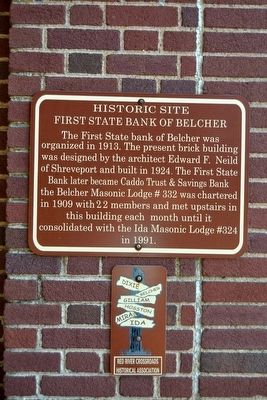 The First State bank of Belcher was organized in 1913. The present brick building was designed by the architect Edward F. Neild of Shreveport and built in 1924. The First State Bank later became Caddo Trust & Savings Bank the Belcher Masonic Lodge #332 was chartered in 1909 with 22 members and met upstairs in this building each month until it consolidated with the Ida Masonic Lodge #324 in 1991.

Topics. This historical marker is listed in these topic lists: Fraternal or Sororal Organizations • Industry & Commerce. A significant historical year for this entry is 1913.

Location. 32° 45.119′ N, 93° 50.004′ W. Marker is in Belcher, Louisiana, in Caddo Parish. Marker is at the intersection of Caddo Street (State Highway 3049) and East Street, on the right when traveling east on Caddo Street. Marker is mounted on the north wall of the building at its west end. Touch for map. Marker is in this post office area: Belcher LA 71004, United States of America. Touch for directions. 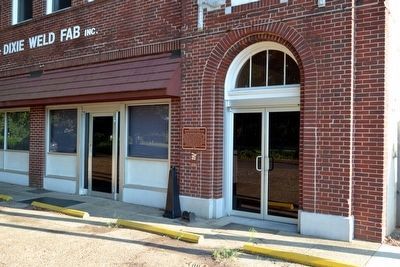 By Duane Hall, August 3, 2015
2. First State Bank of Belcher Marker
Marker is mounted on the north wall
of the building near its west end 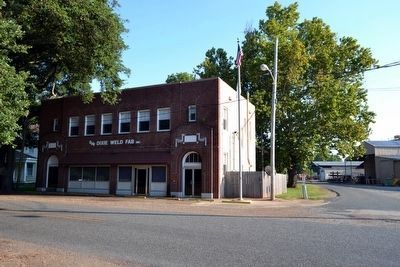