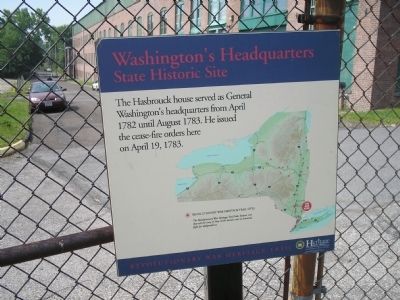 The Hasbrouck house served as General Washington’s headquarters from April 1782 until August 1783. He issued the cease-fire orders here on April 19, 1783.

Topics and series. This historical marker is listed in these topic lists: Military • Notable Places • War, US Revolutionary. In addition, it is included in the Former U.S. Presidents: #01 George Washington, and the George Washington Slept Here series lists. A significant historical month for this entry is April 1782.

Location. 41° 29.832′ N, 74° 0.552′ W. Marker is in Newburgh, New York, in Orange County. Marker can be reached from the intersection of Lafayette Street and Edward Street, on the left when traveling east. Marker is on the grounds of Washington’s Headquarters State Historic Site. Touch for map. Marker is in this post office area: Newburgh NY 12551, United States of America. Touch for directions.

Other nearby markers. At least 8 other markers are within walking distance of this marker. The Disbandment of the Armies (about 300 feet away, measured in a direct line); Uzal Knapp (about 300 feet away); a different marker also named Washington’s Headquarters 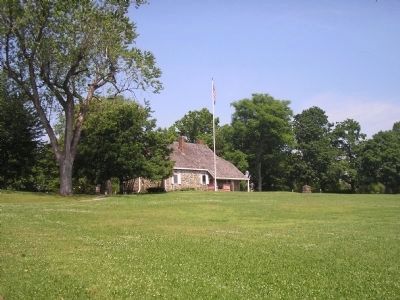 Photographed By Bill Coughlin, June 7, 2008
2. Washington’s Headquarters Marker
Gen. George Washington made his headquarters in this house for 16 months, from April 1782 through August 1783, at the end of the Revolutionary War. It was his longest stay at any of his headquarters. This photo was taken from in front of the marker. 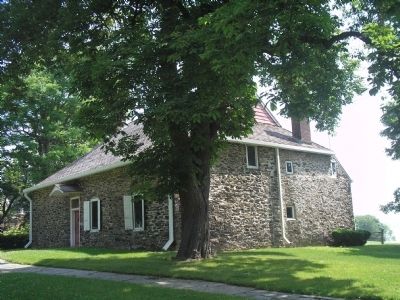 Photographed By Bill Coughlin, June 7, 2008
3. Washington’s Headquarters
Washington and a portion of his army spent the last months of the war here, on the banks of the Hudson River north of West Point. He was at this site when he learned of the Peace Treaty with the British, ending all hostilities. 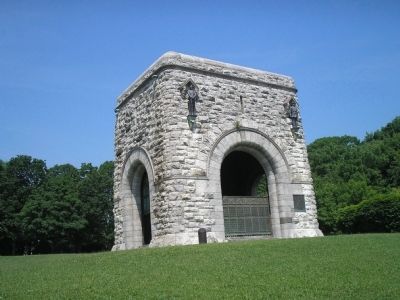