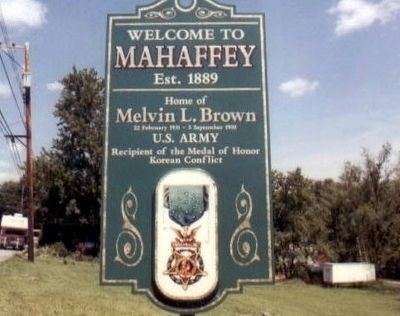 Location. 40° 52.175′ N, 78° 43.15′ W. Marker is in Mahaffey, Pennsylvania, in Clearfield County. Memorial is at the intersection of East Main Street (PA36) and Banner Ridge Road on East Main Street (PA36). The marker is on the property of the U.S. Post Office. Touch for map. Marker is in this post office area: Mahaffey PA 15757, United States of America. Touch for directions. 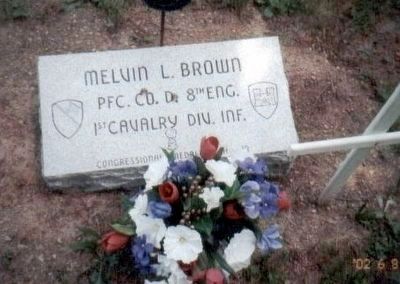 By Don Morfe, June 8, 2002
2. Melvin L. Brown Foot Stone Grave Marker
PFC Melvin L. Brown was killed in action in Korea and is buried in Mahaffey Cemetery. His grave GPS is N40.8698 W78.7164. He was awarded the Medal of Honor for action near Kasan, Korea, 4 September 1950. Citation: Pfc. Brown, Company D distinguished himself by conspicuous gallantry and intrepidity above and beyond the call of duty in action against the enemy. While his platoon was securing Hill 755 (the Walled City), the enemy, using heavy automatic weapons and small arms, counterattacked. Taking a position on a 50-foot-high wall he delivered heavy rifle fire on the enemy. His ammunition was soon expended and although wounded, he remained at his post and threw his few grenades into the attackers causing many casualties. When his supply of grenades was exhausted his comrades from nearby foxholes tossed others to him and he left his position, braving a hail of fire, to retrieve and throw them at the enemy. The attackers continued to assault his position and Pfc. Brown weaponless, drew his entrenching tool from his pack and calmly waited until they 1 by 1 peered over the wall, delivering each a crushing blow upon the head. Knocking 10 or 12 enemy from the wall, his daring action so inspired his platoon that they repelled the attack and held their position. Pfc. Brown's extraordinary heroism, gallantry, and intrepidity reflect the highest credit upon himself and was in keeping with the honored traditions of the military service. Reportedly missing in action and officially killed in action, September 5, 1950. 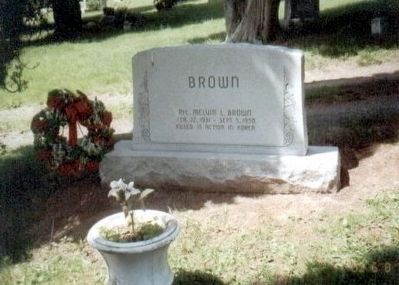