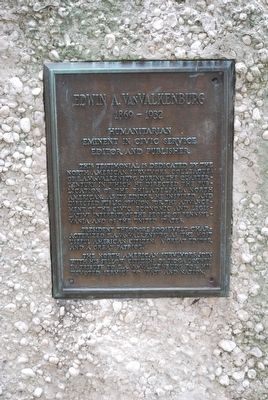 This testimonial is dedicated by the North American survivors, colleagues of E.A. VanValkenburg during the quarter-century in which he directed the publication of the Philadelphia North American. As its editor he inspired and directed public opinion for the advancement of the civic, economic and legislative interests of the people of Pennsylvania and of the United States.

President Theodore Roosevelt characterized E.A. VanValkenburg as "The Most Useful American Citizen: a Great Editor, and a Great Patriot."

The North American survivors join with his fellow citizens of Tioga County in tribute to E.A. VanValkenburg for his devoted service to state and nation.

Topics and series. This historical marker is listed in these topic lists: Communications • Industry & Commerce. In addition, it is included in the Former U.S. Presidents: #26 Theodore Roosevelt series list. 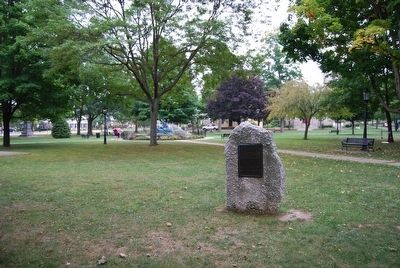 Click or scan to see
this page online
miles west of Central Avenue (Pennsylvania Route 287). Located in Wellsboro Park, the Green. Touch for map. Marker is in this post office area: Wellsboro PA 16901, United States of America. Touch for directions.

More about this marker. Marker is mounted to a large concrete stone.