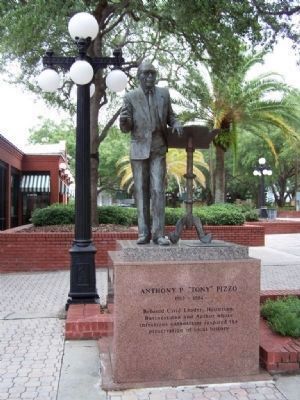 Location. 27° 57.659′ N, 82° 26.334′ W. Marker is in Tampa, Florida, in Hillsborough County. Marker is on E. 8th Ave near Angel Oliva Senior St., on the right when traveling west. Located in Ybor City Historic District of Tampa at Ybor Centennial Park. Touch for map. Marker is in this post office area: Tampa FL 33605, United States of America. Touch for directions. 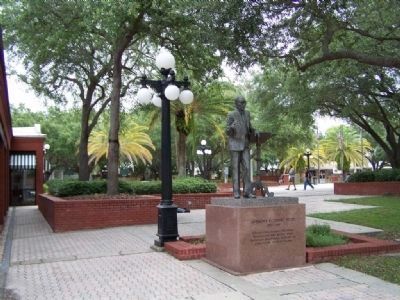 Regarding Anthony P. "Tony" Pizzo. Anthony P. Pizzo was born to Italian parents in Tampa on September 22, 1912. A graduate from Hillsborough High School, he demonstrated early leadership abilities in organizing the Latin community's most popular teenage social club, taking part in debate clubs and rallying behind the Hillsborough High Terriers as head cheerleader. Pizzo studied for two years at the University of Florida before transferring to Stetson University in Deland, where he earned a Bachelor of Arts and studied law, education, and history.

Industrious at an early age, Pizzo sold newspapers on Ybor City's streets to earn spending money. At Stetson University, he worked his way through college by waiting on tables, working in the library and selling shoes. In college, he was elected into the Ye Mystic Krewe Fraternity, the most outstanding organization on the campus, membership in which is based on scholarship, leadership and honorary achievements.

A successful businessman after college, Pizzo was the Tampa agent for the Fidelity Mutual Life 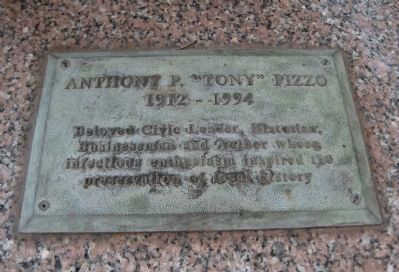 By AGS Media, July 13, 2010
3. Anthony P. "Tony" Pizzo Plaque
This plaque is mounted on the top of the base of the sculpture. The inscription is identical to that used on the front of the granite base.
Assurance Company and served with the military at the Aberdeen Proving Grounds in Maryland from 1942 to 1944. Then, back in Tampa, he started his own company, International Brands, and later went to work with Tampa Wholesale Liquors and the House of Midulla Inc. He was a founder and first president of the Tampa Bay International Trade Council; Ybor City Junior Chamber of Commerce.