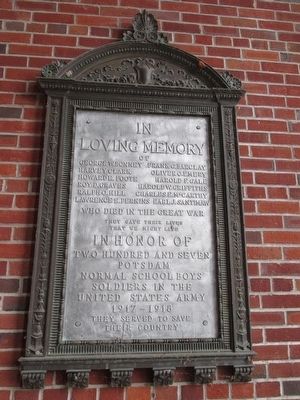 In honor of two hundred and seven Potsdam Normal School boys, soldiers in the United States Army, 1917-1918. They served to save their country.

Location. 44° 39.776′ N, 74° 58.606′ W. Marker is in Potsdam, New York, in St. Lawrence County. Memorial can be reached from the intersection of Pierrepont Avenue (New York State Route 56) and Spring Street. Memorial is fixed to Satterlee Hall, east side center entrance, on the campus of SUNY Potsdam. The west side center entrance is on Pierrepont Avenue at Spring Street. Touch for map. Marker is in this post office area: Potsdam NY 13676, United States of America. Touch for directions. 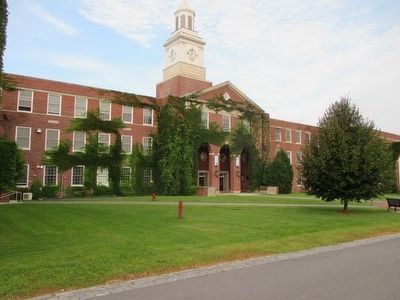 Regarding In Loving Memory. Full text of an article by 1918 graduate Ellen Ricks published in the Spring 2016 Vol. 10 No. 2 edition of Potsdam People:
1919: almost two decades after the turn of the century, and one year before the roar into the '20s. The world's first Great War was coming to an uneasy close. Einstein's theory of relativity was tested and confirmed, and a little college in a sleepy upstate town was making history of its own. On the Potsdam normal School's semi-centennial year of being a Normal School (a college that trains teachers), a lot of not-so-normal things occurred. The Great War had taken 12 of the school's students. In January, the president of the college died suddenly of illness, and the graduating class itself was composed of 64 students, all women. It was the same year that the United States Congress passed the 19th Amendment, granting women the right to vote. In this unusual year, the women at Potsdam Normal School proved that life can still go on as normal.
I suppose the first question that would be on anyone's mind when they hear this would probably be, "How?" How could there be a graduating class comprised solely of women? Well, the long answer would be to tell you about the bullet that killed Franz Ferdinand, but the short answer would be to tell you about the draft, yes, the draft which called our able-bodied men out of the halls of academia and into the trenches. The men being called into the war left women in charge on the homefront. In the 1919 edition of the Normal School senior yearbook, the editors mentioned the lack of men in their class: "To Leon Longale, Frank Roda, Carlton and Nelson Clough, the four junior males, we, who have had no males (this being wartime) do will and bequeath the right to 'start things'" (this being a cheeky way of saying you can start some trouble). Since it only took two years to get through college, there was a younger class (called juniors) and an older class (seniors), meaning there were only four male students on campus, total. However, this did not stop the girls from getting into all sorts of mischief. There were parties, socials and even a boy or two (if you could find one).
So, who were these 64 women who attended the Potsdam Normal School? They were from the surrounding areas of the North Country, either from the town itself, or from areas like Stockholm, Gouverneur, Brownville and other small villages around the area. This was to be expected, because travel took a very long time and was very expensive back then. The student coming from the longest distance was Atha Hall, nicknamed "Alcohol." Hall came from Swanton, Vt. Many of these women were studying to become teachers, since Potsdam Normal School was primarily a teaching college.
Since social media sites were decades away from being created, the Pioneer yearbook was a way for the girls to share all of their inside jokes with each other. They had pages called "shocks," where they write things that would shock them if they did and didn't do it. There was a class poem, and a "prophecy" page, where the girls predicted each other's futures. The yearbook also had a voting contest for best of, which was equally as witty and sassy as the rest of the yearbook. There were some typical categories like "most popular" and "class clown," but also more unusual ones, like "class fret," "always in the wrong" and "class kicker." These girls truly had a sense of humor all their own, and this was a place where they could have some fun sharing their jokes and stories with each other, without censorship.
The height of the girls' cleverness is with the earlier-mentioned Atha Hall, aka, "Alcohol." If that nickname wasn't enough for you, the quote for her is "What will she do if the country goes dry?"
The most important thing is that these girls proved that life goes on. Despite wars, deaths, and lack of the second gender on campus, these girls continued to go to school and become educators. I have fun on campus through clubs and amusements. In many ways, we see a lot of today's modern woman in these girls: independent, unabashed and spirited. In the coming years, with more wars and rights to come, the Class of 1919 proves that under any circumstances, we must all try to carry on, no matter how normal or un-normal they are.

Categories. • War, World I •
More. Search the internet for In Loving Memory.