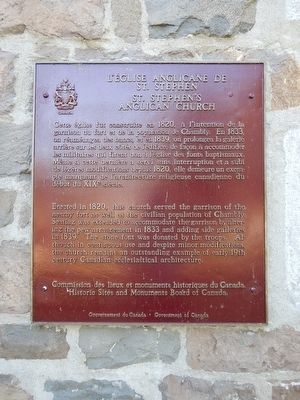 English:
Erected in 1820, this church served the garrison of the nearby fort as well as the civilian population of Chambly. Seating was extended to accommodate the garrison by altering the pew arrangement in 1833 and adding side galleries in 1839. The stone font was donated by the troops. Although in continuous use and despite minor modifications, the church remains an outstanding example of early 19th-century Canadian ecclesiastical architecture.

Erected 1970 by Historic Sites and Monuments Board of Canada.

Topics and series. This historical marker is listed in this 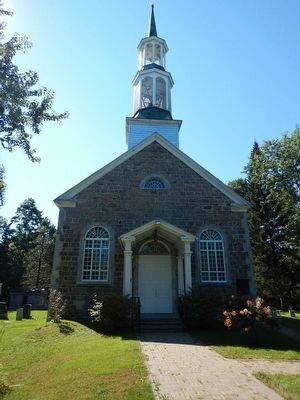 By Kevin Craft, September 15, 2015
2. Wideview of St. Stephen's Anglican Church and Marker
(marker is to the right of the entrance)

Click or scan to see
this page online
topic list: Churches & Religion. In addition, it is included in the Canada, Historic Sites and Monuments Board series list. A significant historical year for this entry is 1820.