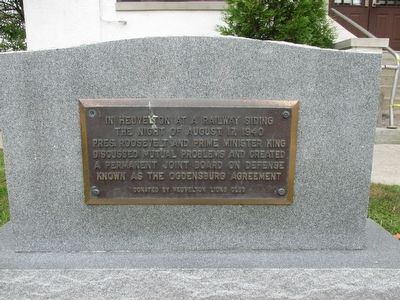 In Heuvelton at a railway siding the night of August 17, 1940, Pres. Roosevelt and Prime Minister King discussed mutual problems and created a permanent joint board on defense known as the Ogdensburg Agreement.

Topics and series. This historical marker is listed in these topic lists: Railroads & Streetcars • War, World II. In addition, it is included in the Former U.S. Presidents: #32 Franklin D. Roosevelt series list. A significant historical date for this entry is August 17, 1940.

Location. 44° 37.144′ N, 75° 24.516′ W. Marker is in Heuvelton, New York, in St. Lawrence County. Marker is at the intersection of State Street (New York State Route 812) and Justina Street, on the right when traveling north on State Street. Touch for map. Marker is at or near this postal address: 51 State Street, Heuvelton NY 13654, United States of America. Touch for directions.

Other nearby markers. At least 8 other markers are within 6 miles of this marker, measured as the crow flies. Township of Oswegatchie World War II Roll of Honor (here, next to this marker); Curtis Homestead (approx. 4.6 miles away); Rensselaer Falls War Memorial 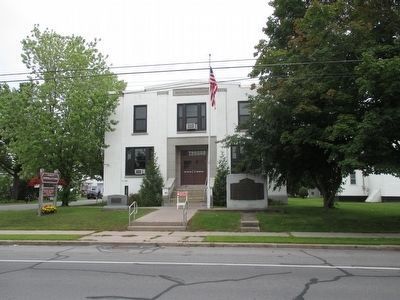 Photographed By Anton Schwarzmueller, August 29, 2015
2. Marker at Oswegatchie Town Offices
Marker at left of the entrance.

Regarding The Ogdensburg Agreement. From Heuvelton, the railroad ran north to Ogdensburg and south to De Kalb Junction. It has long been abandoned. It was part of the Rome, Watertown and Ogdensburg Railroad, later the New York Central. The last operator of this section was the Ontario Eastern Railroad.