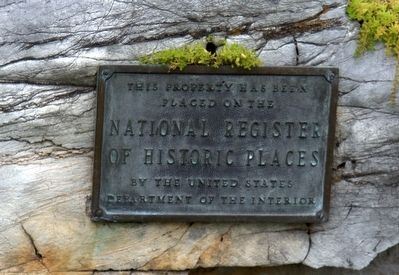 This property has been placed on the National Register of Historic Places by the United States Department of the Interior.

Topics. This historical marker is listed in this topic list: Notable Buildings. A significant historical year for this entry is 1775.

Location. 38° 33.345′ N, 78° 50.135′ W. Marker is near Edom, Virginia, in Rockingham County. Marker is on Harpine Highway (Virginia Route 42) north of Williamsburg Road (County Route 782), on the left when traveling north. Touch for map. Marker is in this post office area: Linville VA 22834, United States of America. Touch for directions.

More about this marker. This maker is on private property. Do not trespass onto the property. 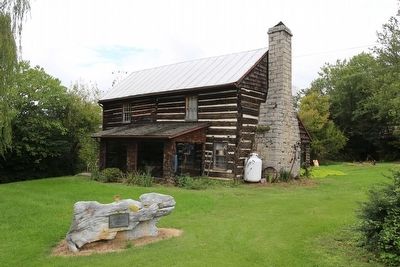 Click or scan to see
this page online
Wikipedia Entry: Baxter House is a historic home located near Edom, Rockingham County, Virginia. The house dates to about 1775, and is a single pile, double-pen dwelling consisting of two abuted two-bay, two-story log structures set on limestone foundation. It was built by Scottish settler George Baxter, whose son George A. Baxter served as president of Washington and Lee University from 1799 to 1829.

Also see . . .  NRHP Nomination Form. “Statement of Significance: The Baxter House exhibits some of the finest log construction to be found in Virginia. The later west section of the double-pen dwelling has rare full dovetail corner notching fitted with a precision usually reserved for fine furniture. The logs themselves are so uniformly dressed and fitted that no chinking is required. Tradition has it that this finely crafted portion of the house was built with the aid of nearby German craftsmen.

The original or east section is more typical of the log houses built by the Scotch-Irish settlers in the Valley. Although well constructed it has half-dovetail corner notching and bands of chinking between the logs. The curve-tapered limestone chimney, however, is an outstanding example of early Valley masonry. Another unusual feature is the abutting of the two sections with spliced logs.

The original portion of the house was probably built in the late eighteenth century by George Baxter, a Scottish immigrant,with the 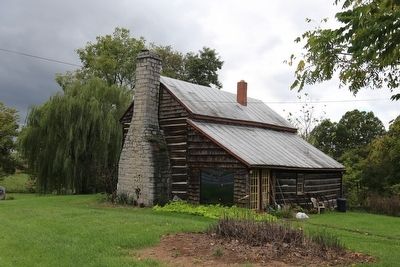