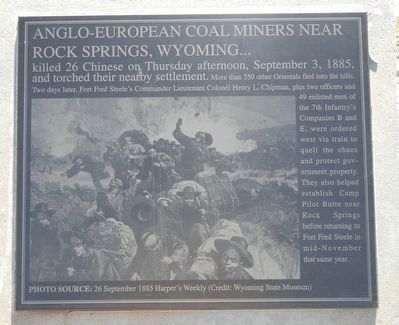 Anglo-European Coal Miners Near Rock Springs, Wyoming... killed 26 Chinese on Thursday afternoon, September 3, 1885, and torched their nearby settlement. More than 550 other Orientals fled into the hills. Two days later, Fort Fred Steele's Commander Lieutenant Colonel Henry L. Chipman, plus two officers and 49 enlisted men of the 7th Infantry's Companies B and E, were ordered west via train to quell the chaos and protect government property. They also helped establish Camp Pilot Butte near Rock Springs before returning to Fort Fred Steele in mid-November that same year.

Topics. This historical marker is listed in this topic list: Asian Americans.

Other nearby markers. At least 8 other markers are within walking distance of this marker. Image of Fort Fred Steele (here, next to this marker); Major Thomas Tipton Thornburgh 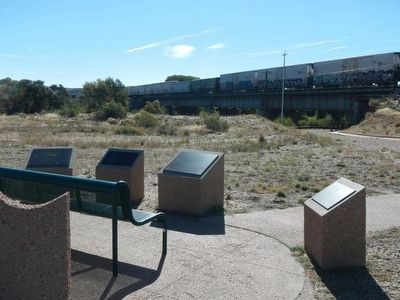 More about this marker. This marker, among a grouping of a half-dozen other markers, is located at Fort Fred Steele State Park on County Road 347, north of the Interstate 80 Exit 228 and on the north side of the railroad tracks near where County Road 347 passes beneath the railroad bridge.

Also see . . .
1. The Rock Springs Massacre - Wyoming Historical Society. On the morning of Sept. 2, 1885, a fight broke out between white and Chinese miners in the No. 6 mine in Rock Springs. Whites fatally wounded a Chinese miner with blows of a pick to the skull. A second Chinese was badly beaten. Finally a foreman arrived and ended the violence. But instead of going back to work, the white miners went home and fetched guns, hatchets, knives and clubs. (Submitted on October 21, 2015, by Barry Swackhamer of Brentwood, California.)

2. Chinese and the Anti-Chinese Movement - Center for the Study of the Pacific Northwest. Chinese immigrants 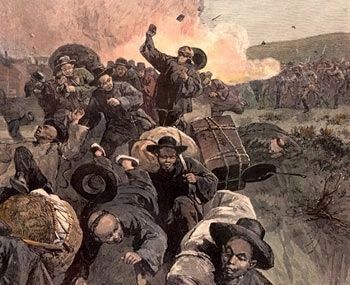 By Harper's Illustrated, circa 1885
3. The Rock Springs Massacre
worked primarily as laborers and lived largely in the states and territories of the American West. Most toiled at mining and constructing railroad lines across the region, and they also worked in agriculture. Some worked at providing services to other Chinese people, particularly those concentrated in Chinatown districts in western cities. (Submitted on October 21, 2015, by Barry Swackhamer of Brentwood, California.) 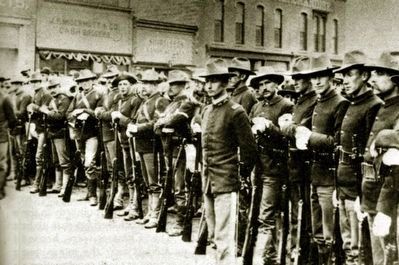