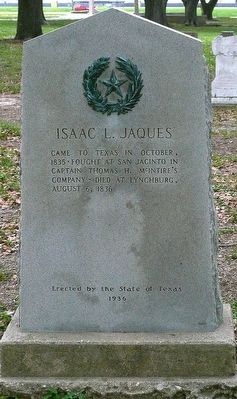 By Jim Evans
1. Isaac L. Jaques Marker
Inscription.
Isaac L. Jaques. . Came to Texas in October, 1835. Fought at San Jacinto in Captain Thomas H. McIntire's company. Died at Lynchburg, August 6, 1836. . This historical marker was erected in 1936 by The State of Texas. It is Near La Porte in Harris County Texas 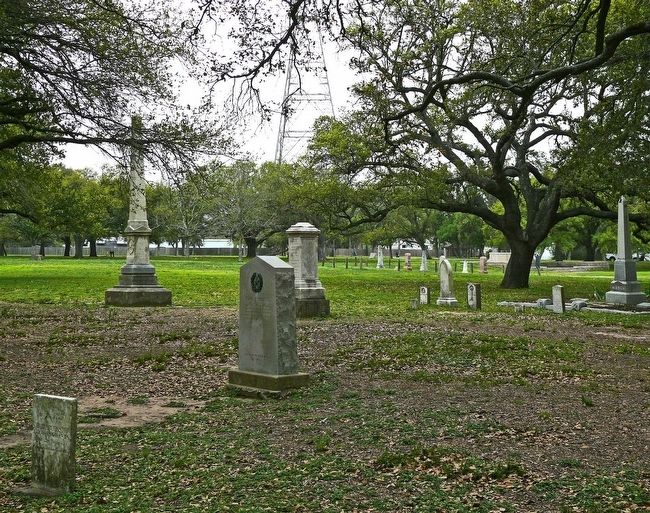 By Jim Evans
2. Cemetery on the Site of the Battle of San Jancinto
Many of those who died at the Battle of San Jacinto that won Texas independence from Mexico are buried on the commemorative site of the battle
of this marker); David Thomas (within shouting distance of this marker); De Zavala Plaza (about 300 feet away, measured in a direct line); Lorenzo De Zavala (about 300 feet away). Touch for a list and map of all markers in La Porte.
Credits. This page was last revised on November 6, 2018. It was originally submitted on October 31, 2015, by Jim Evans of Houston, Texas. This page has been viewed 361 times since then and 4 times this year. Photos:   1, 2. submitted on October 28, 2015, by Jim Evans of Houston, Texas. • Bernard Fisher was the editor who published this page.
Share This Page.